We Refugees Archive is a growing digital archive on refugeedom in the past and present. It focuses on individual experiences and the microcosm of the city as a place of refuge and new beginnings. 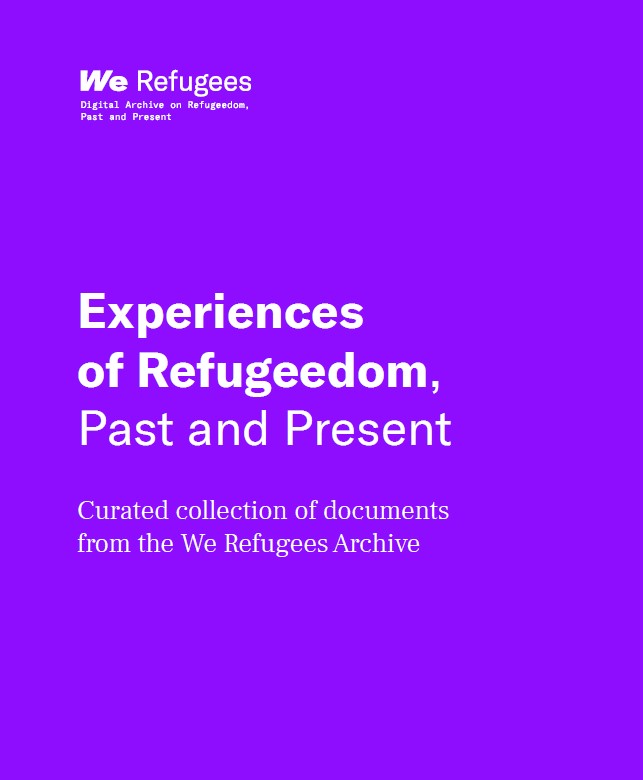 The archive spans an arc from historical to current experiences of flight, which are brought into dialogue and thus provide new connecting lines and explanatory approaches from and with refugee voices for European and international remembrance and education policy. In current discourses about refugeedom, the (European) past serves as an instinctive projection screen and an intuitive frame of reference – associatively, metaphorically, symbolically. Through the interweaving of past and present, We Refugees Archive gets to the bottom of these projections and questions familiar lines of connection and division in order to stimulate a new narrative about refugeedom. The focus of the historical documents is on the self-testimonies of people who sought to escape Nazi persecution by fleeing (within and out of Europe), among them predominantly Jews. The current section is devoted to a spectrum of the most varied flight movements of recent decades (mainly to Europe). This archival core is enriched with filmic approaches to refugeedom and contextualized by scholarly discussions, interviews with experts and academic guest contributions on relevant questions in the field of flight migration and/or regarding the specific examples of cities of refuge. As an analogous addition to the We Refugees Archive, a successively growing curated collection of selected documents from the archive is being created, which serves as a support for educational work on historical and current experiences of flight.

The archive focuses on selected cities of refuge, which in the past and present have had a special position as refuges: as places of resistance against national exclusion policies, as microcosms in which visions and structures for an open urban community and a common future are created. But they have also reached and continue to reach their limits, while they are developing as places where refugees can build up networks and a new life for themselves at the same time. In January 2019, the project started with Vilnius and Palermo as historical and contemporary cities of refuge. From 2020, further cities of refuge in the past and present will follow, including Berlin, Paris, Istanbul and New York. In today’s cities of refuge, workshops with refugees and interviews with experts are conducted and existing testimonies of people about their flight and arrival are recorded. The historical examples will be developed, among other things, through research in archives and previously published ego-documents.

What’s in a name?

We Refugees Archive is inspired by Hannah Arendt’s 1943 article of the same name. Already then, Arendt’s “We” was thought as a directive for the future and a call to think beyond the boundaries of the  nation-state model which is clearly not capable of protection.

“The loss of human rights does not take place when this or that right, which is usually counted among human rights, is lost, but only when man loses the position in the world by which alone he can have rights at all and which is the condition for his opinions to carry weight and his actions to be of importance.” 11Hannah Arendt, 1958: The Origins of Totalitarianism, Ohio: The World Publishing Company, Chapter 9. // Arendt, Hannah, 2017: Elemente und Ursprünge totaler Herrschaft. Antisemitismus, Imperialismus, totale Herrschaft. München und Berlin: Piper. (amerik. Original 1951), S. 613.

The analyses of flight and lawlessness that Arendt developed in “We Refugees” and other writings from her own experience as a refugee Jewish woman and stateless person over many years are still relevant to many flight biographies today and are becoming increasingly urgent.

A comparison of historical and contemporary experiences of flight and arrival does not aim to equate them. The aim of We Refugees Archive is rather to showcase their connections and discontinuities on the basis of individual experiences of people who have fled, both now and in the past. Similarities as well as differences will be identified on the basis of different topics that deal with the experiences of flight, new beginnings, visions of the future, support, questions of identity and exclusion from a biographical perspective.

“Archive” is a perennially hazy term that inherently negates the claim to completeness. Archives are fundamentally selective, are based on randomness and contingencies and subject to certain constellations of power and (un/conscious) motivations. Shaped by presence and absence, the specific composition of traces and voices fundamentally determines the structure and cognitive potential of each archive.

As an archive of refugeedom in the making, We Refugees Archive is not only growing with the continuous addition of individual experiences of flight and arrival in new examples of cities of refuge. As an archive of flight, it is simultaneously haunted by all those whose voices are not (or could not) be heard – either because they did not manage to flee, died during their flight, were murdered or were denied a new beginning in some other way, or because of our ignorance as archive creators. All these voices, however, are also part of the “we” in We Refugees Archive and encapsulated in and despite its inevitable archival gaps. They have to always be kept in mind as well.

Thus We Refugees Archive is inherently incomplete. It successively incorporates existing archives with newly created materials, curated into an eclectic collection that spans genres and times on several interlocking levels – from conventional contextualized archival documents, interviews, testimonies, memoirs, contemporary historical photographs and a growing oral history archive to artistic films that approach flight experiences in a participatory and innovative way. Our concept of the archive is thus broad and understands the construction of archives as a process of collecting, elaborating and contextualizing different material from which narratives about refugeedom can be derived.

The use of an archive also does not follow definable rules, which in itself holds a perpetual potential for knowledge. With this in mind, We Refugees Archive tries to give users a new, emphatic and associative access to the complex of past and present lives as refugees, and refrains from strict instructions for use. The archival materials can be used in digital and analogue form for the historical-political remembrance and educational work of museums, memorials, schools, universities and other institutions.