In her memoir from 1984, Susanne Friedmann-Kirsch (born 1926) describes her family’s flight migration – a “three-year Odyssey” – from Vienna after the Anschluss in 1938 via Istanbul to Haifa. In this excerpt, she discusses her time in Istanbul.

“The landladies were pleased to tell us that we had rented a “famous” apartment; Leon Trotsky had lived there after his expulsion from Russia […]. He too was a poor refugee who could not afford anything better.” PDF 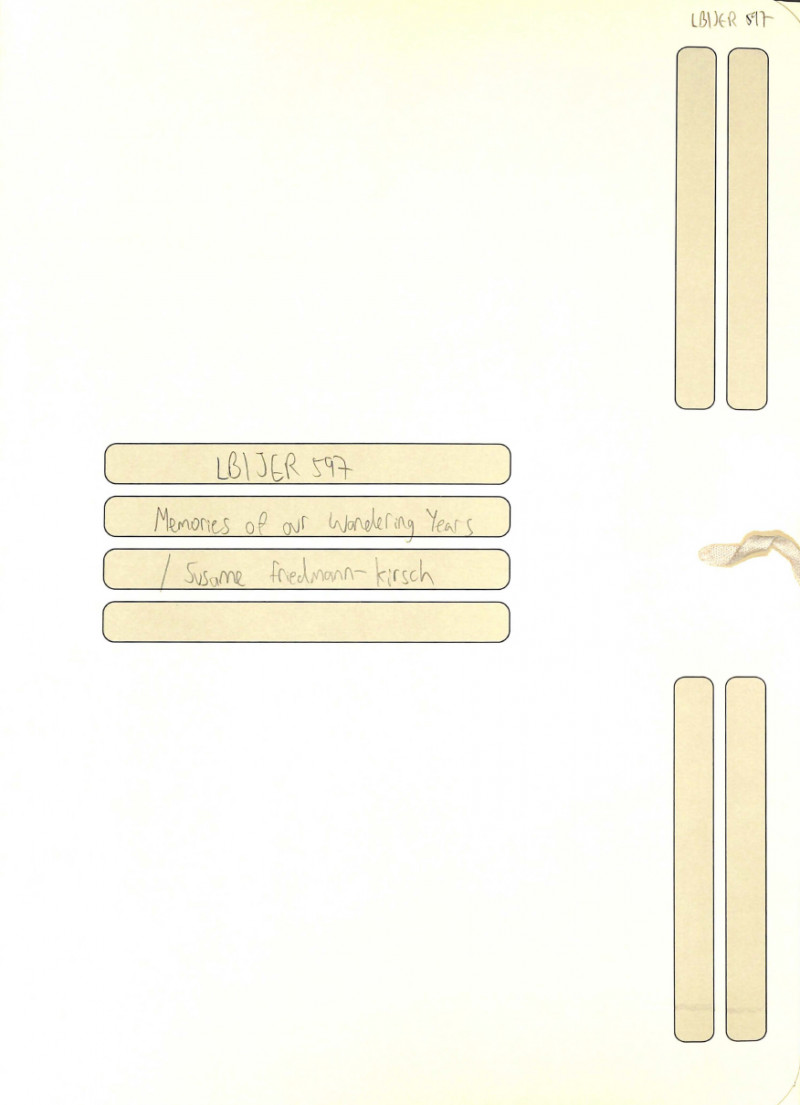 Now our next destination was Istanbul, Turkey. One more problem had to be solved. Where were we going to change from one passport to the other? We could not leave Yugoslavia with a passport that had no entry stamp in it; neither could we enter Bulgaria (which had to be passed on the way to Turkey) even though we had a transit visa with a passport that did not have the Yugoslav exit stamp. I think Father found someone willing to sell exit stamps.

We left Zagreb on the Orient Express, passing through Belgrade, Sofia, and a tiny corner of Greece on the way to Istanbul. In Sofia we stopped and went sightseeing. It turned out that we had left Yugoslavia just in time. A few days after we traveled, on October 28, 1940, Italy invaded Greece from Albania, and the Orient Express stopped running. We reached the Turkish border in the early morning hours and stood there for a long time. We were allowed off the train. I walked around looking at the eerie landscape and a partial moon – in the same position as it is on the red Turkish flag. I had never seen the moon almost lying on its back, but then I had never been that far south.

Our hotel in Istanbul was lousy. One evening when alone, I heard an incredible noise in the stove-pipe. Eventually a family of mice came dancing out of the stove. Soon we looked for a furnished apartment and found one in an older inner suburb. The owners of the two-story house were two elderly Greek sisters who [page 24] lived on the first floor. We rented the five-room apartment on the second floor. My room had a balcony, which became the new home for my turtle. The furniture was dark and heavy, probably old, and full of woodborers working away at night. The landladies were pleased to tell us that we had rented a “famous” apartment; Leon Trotsky had lived there after his expulsion from Russia, on his way to Mexico and eventual assassination. He too was a poor refugee who could not afford anything better. The location on a quiet street was conveniently close to shopping and trolley stop. I went shopping with Mother, but refused to enter or even go near the butcher shops, none of which had cold storage facilities. All the smelly carcasses, mostly lamb, hung on hooks outside and inside the shops. Once a week was market day. We hired a boy with a big basket on his back about 12 to 15 years old, who accompanied us from stall to stall and who at the end of our shopping expedition, carried our supplies upstairs. I remember nothing about our kitchen, a sign that I did no cooking whatsoever.

Soon I settled nicely into a routine and came to love Istanbul and its surroundings. Since I finally wanted to go to school, we made inquiries at the English high school, but it was too expensive. Also the school term had long since started and we did not know how long we would stay in Istanbul. Instead I registered for English and French courses at the Berlitz school, where I went a few times a week.

To get to school, I took the trolley car, which had a two-class system. The first car, red, was first class, the second, green, was second-class. Distance was divided into zones. The [page 25] trip to school took two zones. I got money for first-class and two zones, but usually walked a few stops into one zone and went second-class. I was pinched in both classes. The first-class pinchers were just better class (economic) pinchers. I did not like being pinched, but we were in the Middle East, where pinching was routine, even of young girls.

The trolley money thus saved I spent on stamps. I knew all the stamp shops in Istanbul and spent a lot of time with my stamp collection, which had crossed the border illegally with us. I also read a lot, mostly detective stories which I discovered at that time. Once a week mother and I went to the Austrian Library to exchange books. One day Mother insisted I read no more detective stories in German. If I wanted to read them, she said, I would have to read them in English. In German I was to read good books. Mother had an old school friend, married to a Dutchman, who had been living in Istanbul in a nice house for a long time. Once a week we were invited for dinner to their house. I loved going there because it was such a civilized environment. I had forgotten how non-refugees lived. They had shelves upon shelves of books and among them rows of Penguin detective stories, which I was welcome to borrow. Sometimes the Dutchman would help me with my pronunciation and vocabulary. Eventually, I developed a crush on him. By reading the detective stories I increased my English wordpower considerably.

Istanbul was full of Central European refugees, some of whom, like the Garvins, we had met during our travels. The Garvins came with us to Istanbul. But we also acquired a whole new set of friends

[page 26] Talk evolved mostly about how to get out of this last corner of Europe. I remember one set of friends discussing the possibility of taking the train through Anatolia to Teheran and then a boat down the Euphrates to the Gulf of Persia and eventually India. They had heard that some refugees had succeeded in that venture.

We did a  lot of sightseeing, especially on weekends. I remember our first visit to the one square kilometer covered bazaar in Stambul, the old part of Istanbul. We were enticed into all kinds of little shops. In one we were offered Turkish coffee and being new to shopping in a bazaar, Mother felt obliged to make a purchase, and wound up with a little Turkish-looking ashtray. Once at home, she was very disappointed when, on closer examination, she found that it was made in a town in Czechoslovakia that was famous for tourist souvenirs. We also toured the famous Hagia Sofia and Blue Mosque in Stambul. We went on many boat trips – one through the Bosporus into the Black Sea. The Bosporus is not very wide and we could admire the fortifications on the European and Asian shores. Other boat trips took us into the Sea of Marmara where we had a choice of four small islands to visit, each with different vegetation. On the biggest one, donkeys were for hire and we explored the island rather uncomfortably on their backs. Many times we crossed the Bosporus to Asia Minor by ferry. From the ferry we had a marvelous view of all of Istanbul.

Towards the end of 1940, Hungary, Romania, and Bulgaria joined the Axis, and the noose around Istanbul tightened. The war between Italy and Greece was a standstill. The Italian soldiers were no match for the Greek soldiers. But at the beginning of April, Hitler joined Mussolini in the Greek campaign and slowly [page 27] the Greeks were pushed south. The various refugee groups started to petition the British in Istanbul to help evacuate them.

Father joined an Austrian group and became one of their leaders. He did not trust them and when he found the Czech group more congenial he joined them. One evening late in April when we were at dinner at the house of our Dutch friends, we received that the Austrian consul had denounced us as German spies to the Turkish police and he advised us to leave as soon as possible. Father had been correct not to trust the Austrians. The following day we packed frantically, and the day after we left.

Asylum on the Bosphorus

In the documentary "Asylum on the Bosporus" Adelheid Scholz and Cornelius Bischof talk about their experiences with their family, in the internment camp and in the Nazi youth camp in the 1930s in Istanbul from a current perspective. In the We Refugees Archive, some excerpts from the documentary are selected to show the former refugee children's confrontation with their own memories.

The lawyer and university lecturer Ernst Eduard Hirsch (1902-1985), like thousands of others, had to leave Germany after the Nazi rise to power. His new life began in Istanbul, where he was able to advance his academic career and later felt like a Turkish civil servant.

“There is life after the flight. But the flight acts upon
oneself for a lifetime.”

“There is life after the flight. But the flight acts upon oneself for a lifetime.”

“I was allowed to leave for the funeral of my aunt and decided not to return.”

“Max kept writing that we should by all means come to Paris – the rest would take care of itself.”

George Edel about the Flight from Vienna via Zagreb to Paris

George Edel, a Jewish doctor from Vienna (who converted to Christianity), tells of the flight preparations in the wake of the annexation of Austria…

“Paris was so beautiful. I had found friends and now I had to leave. My head told me how fortunate I was, but my heart rebelled.”

George Edel about the stay in Paris

George Edel, a Jewish doctor from Vienna (who converted to Christianity), tells of his flight from Zagreb to Paris and of his stay in…

Majid Bolat comes from the Darfur region in Sudan and belongs to the ethnic group of the Fur people. He fled to Turkey via…