Passport of the German Reich for Fritz Neumark

Even in exile, holders of a German passport could not escape anti-Semitic persecution. Fritz Neumark, for example, had to have a “J” stamped into his passport in 1939. In 1940 he was forced to register the compulsory first name “Israel”. 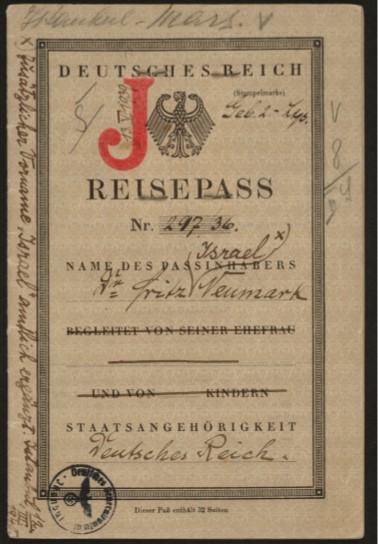 Fritz Neumark was a German-Jewish financial scientist and Rector of the University of Frankfurt in 1954/55 and 1961/62. In the spring of 1933, Fritz Neumark lost his professorship at the University of Frankfurt because of his Jewish origins. In September 1933, he emigrated to Turkey with his wife and their two children, who were two and four years old. Through the mediation of the Notgemeinschaft deutscher Wissenschaftler im Ausland (Emergency Society for German Scholars in Exile), he was able to take up a professorship in the field of social hygiene and statistics at the University of Istanbul. Under the President Mustafa Kemal Atatürk, German scientists were welcome there. With their expertise, scientists in particular were to contribute to the development and modernization of Turkey.

He quickly acclimated and learned Turkish. This enabled him to maintain intensive contact with his students. Fritz Neumark soon edited an economics journal and wrote numerous professional publications. After the end of the war, Fritz Neumark initially remained in Turkey and headed the newly founded Institute of Financial Sciences at the University of Istanbul from 1946. He advised the Turkish government and central bank and was involved in the reform of the Turkish tax system. When he received a call to the University of Frankfurt in 1949, he initially accepted it only as a guest. In 1952 he decided to return to Germany permanently. He did not take German citizenship again until 1954, in addition to his Turkish citizenship.

Starting in 1933, Turkey invited specialized professionals and members of scientific and artistic professions from Germany to immigrate. They were to help develop economic, cultural and social life. Many were given leading positions, for example in ministries or at universities. At the University of Istanbul, more than half of the professorships were occupied by exiles by the mid-1940s. They passed on their professional and institutional knowledge and received a specialist salary in return. The conditions of their contracts also included learning the language quickly so that they would soon be able to teach and publish in Turkish. Political activity was forbidden to the emigrants.

Asylum on the Bosphorus

In the documentary "Asylum on the Bosporus" Adelheid Scholz and Cornelius Bischof talk about their experiences with their family, in the internment camp and in the Nazi youth camp in the 1930s in Istanbul from a current perspective. In the We Refugees Archive, some excerpts from the documentary are selected to show the former refugee children's confrontation with their own memories.

The lawyer and university lecturer Ernst Eduard Hirsch (1902-1985), like thousands of others, had to leave Germany after the Nazi rise to power. His new life began in Istanbul, where he was able to advance his academic career and later felt like a Turkish civil servant.

“It seems to me that the emigration of Germans to Turkey in the years following the seizure of power by National Socialism represents such an exceptional case, and a particularly fortunate one at that.”

Fritz Neumark about his multiple fortunes in Istanbul

The financial scientist Fritz Neumark (1900–1991) talks about his beginnings in exile in Turkey, his expectations and his good fortune to have been offered…

“We were homesick for the landscape and above all for ‘our language’.”

Fritz Neumark on his “Sprach-Heimweh” and his return

The financial scientist Fritz Neumark talks about homesickness and his not easy decision to return to Germany after 16 years of exile in Istanbul,…

Appointment as professor of Fritz Neumark

On September 21, 1933, Dr. Fritz Neumark was appointed to the University of Istanbul, three weeks after his letter of dismissal due to the…

Dismissal of Fritz Neumark from his job

Official letter from the Prussian Minister for Science, Art and National Education, dated September 1, 1933, to Fritz Neumark concerning his withdrawal from teaching…

Expatriation of Fritz Neumark from the German Reich, July 1040

Expatriation of Fritz Neumark from the German Reich

In July 1940, Fritz Neumark received notification in Istanbul that he and his family had been expatriated.

Questionnaire from the German Consulate General in Istanbul to Fritz Neumark, May 1938

Questionnaire from the German Consulate General in Istanbul to Fritz Neumark, May 1938

During his exile in Istanbul, Fritz Neumark received a questionnaire from the German Consulate General in Istanbul reflecting Nazi racial policies. Whether he filled…

“Of course, renouncing Germany does not mean growing roots elsewhere at the same time.”

In this 1938 letter to Leonie Zuntz, Fritz Rudolf Kraus (1910–1991) describes his feelings about the exilic condition in Turkey. He wonders whether he…