Report compiled by Moses Beckelman, Lithuanian delegate of the American Jewish Joint Distribution Committee, about the “Nobody’s Land” within the Suwałki Triangle, 10 November 1939. 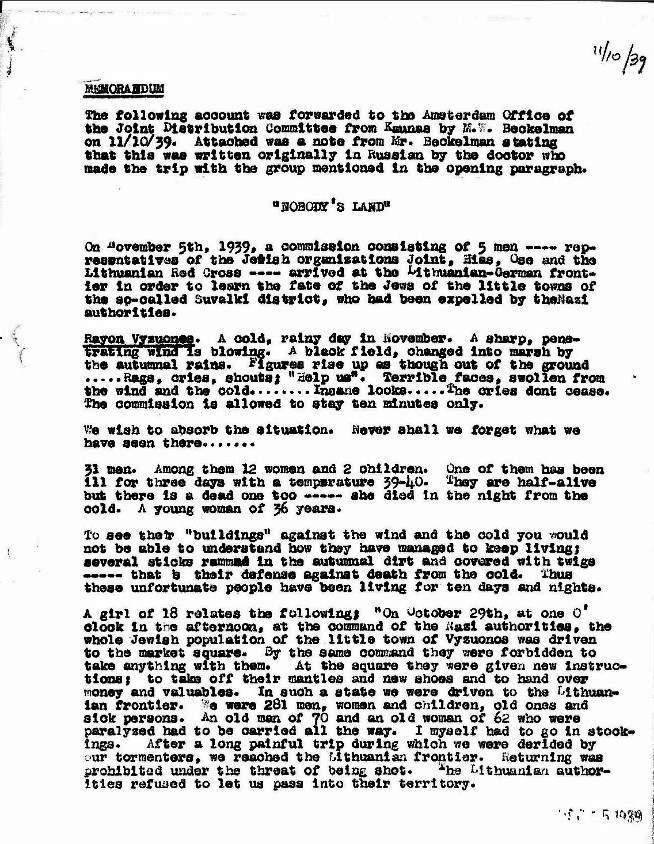 The following account was forwarded to the Amsterdam Office of the Joint Distribution Committee from Kaunas by M.W. Beckelman on 11/10/39. Attached was a note from Mr. Beckelman stating that this was written originally in Russian by the doctor who made the trip with the group mentioned in the opening paragraph.

On November 5th, 1939, a commission consisting of 5 men —- representatives of the Jewish organizations Joint, Hias, Ose and the Lithuanian Red Cross —- arrived at the Lithuanian-German frontier in order to learn the fate of the Jews of the little towns of the so-called Suwalki district, who had been expelled by the Nazi authorities.

Rayon Vyzuonos. A cold, rainy day in November. A sharp, penetrating wind is blowing. A black field, changed into marsh by the autumnal rains. Figures rise up as though out of the ground ….. Rags, cries, shouts; “Help us”. Terrible faces, swollen from the wind and the cold …….. Insane looks ….. The cries don’t cease. The commission is allowed to stay ten minutes only.

We wish to absorb the situation. Never shall we forget what we have seen there …….

31 men. Among them 12 women and 2 children. One of them has been ill for three days with a temperature 39-40. They are half-alive but there is a dead one too —– she died in the night from the cold. A young woman of 36 years.

To see their “buildings” against the wind and the cold you would not be able to understand how they have managed to keep living; several sticks rammed in the autumnal dirt and covered with twigs —– that is their defense against death from the cold. Thus these unfortunate people have been living for ten days and nights.

A girl of 18 relates the following; “On October 29th, at one o’clock in the afternoon, at the command of the Nazi authorities, the whole Jewish population of the little town of Vyzuonos was driven to the market square. By the same command they were forbidden to take anything with them. At the square they were given new instructions; to take off their mantles and new shoes and to hand over money and valuables. In such a state we were driven to the Lithuanian frontier. We were 281 men, women and children, old ones and sick persons. An old man of 70 and an old woman of 62 who were paralyzed had to be carried all the way. I myself had to go in stockings. After a long painful trip during which we were derided by our tormenters, we reached the Lithuanian frontier. Returning was prohibited under the threat of being shot. The Lithuanian authorities refused to let us pass into their territory.[“]

281 men remained in the open field, in the marshy country, in the air, in “Nobody’s Land”, condemned to death from hunger and cold. The life of a caveman seemed ideal to them, for they did not even have caves …

During the first two days the German authorities did not allow them to build any shelter against the autumnal winds. On the third day they were allowed to use twigs to serve as a kind of roof. They did not have any food with them and no delivery of food was permitted. They surely would have perished, particularly the little children, had it not been for some help that they obtained from three poor peasants’s families who lived close by.

The news about the Jews of Vyzunos [Vyžuonos] condemned to death spread all over the small frontier towns. The Jewish youth set about energetically helping, and owing solely to them and in spite of the various prohibitions from one source or another they succeeded in passing in some food and thus keeping them alive.

Some of these people, driven to despair and having nothing to lose, secretly passed during the night from “Nobody’s Land” to Lithuanian territory, even at the risk of being shot own by the frontierguards. Thus the population of “Nobody’s Land” decreased as time went on. The more active ones passed over the frontier and there remained only the weakest and most helpless and unhappy people, full of fright and despair.

This was their condition when the commission found them. On returning from “Nobody’s Land”, the commission met a local country-woman. We asked her whether she had seen the expelled people. “Oh”, said she, “yes well, it is better now than it has been. But the first days were awful, yes, rather awful.”

The same procedure was practiced by the German authorities in Seinai and other little towns close by. Since October 25th, Jews have been driven from the places where they had been living all their life long. Everywhere the same methods; robbery, taking of clothes, derision, marching to the Lithuanian frontier. The Lithuanian authorities refusing to permit them entrance to their territory, they had to stay in the open air, day and night. By November 2nd there were 700 men already.

The suffering and torments of the women and children cannot be described. A woman, mother of two six month twins, not being able to suffer any longer, threw her children in the field and rushed into a pond. They succeeded in saving her. The Lithuanian frontier guards had pity on them and pet [let] them pass the frontier finally.

An old man of 78 years with an amputated leg was not allowed by the Germans to take bis protes with him and the unfortunate man had to be carried on the shoulders al the way along. After several days in the open air, he was helped to pass over the Lithuanian frontier secretly. The old man relates “You cannot imagine how they tormented us. At Seiniai [Seinai] they compelled us to clean closets with our very hands. In their sadism the Nazi guards compelled us to drink their urine”.

Many of those who have passed into Lithuania have frostbitten arms and legs. Others have internal injuries the extent of which can only be known after thorough medical examination. At present we may only say; they are wholly destitute, hungry and naked.

This report was originally written by a doctor who was part of a five-person commission of delegates from the Jewish aid organizations Joint, HIAS, OZE and the Lithuanian Red Cross who traveled from Vilnius to the Lithuanian-German border on 5 November 1939 in order to inspect the situation of Jewish refugees in the so-called “no man’s land” in the Suwałki Triangle (district Vyzunos) who were stucked in front of the Lithuanian border. Originally written in Russian, the report was translated by Moses Beckelman, Joint delegate in Vilnius/Kaunas in 1939/40, and sent to Amsterdam where it arrived on 15 November 1939.

The doctor reports clearly about the difficult situation in which the Polish Jews, who were driven out by the German invadors, found themselves within the so-called “No Man’s Land” at the closed Lithuanian border. Temperatures around freezing, diseases and risky crossing of the border, that was protected with the order to shoot, led often to death. Jewish aid and youth organizations tried to ease the sorrow by making the entry to Lithuania possible.

In a detailed interview with the “Committee to Collect Material about the Destruction of Polish Jewry, 1939“, Pese R. spoke about here flight through the Suwałki no-man’s-land. Her report was the basis for one of the films that are part of the We Refugees Archive, “No Man’s Land“.

“There are no words for my suffering.”

On 24 June 1941, Kruk writes about his discouragement regarding his futile attempts to leave Vilnius for the USA shortly after the German attack…

“The office has accumulated an enormous amount of material on German crimes… .”

Pinkhas Shvarts about bombings during his flight

On the night of September 5-6, 1939, just a few days after the German attack on Poland, a group of Jewish journalists and writers…

Benzion Benshalom wrote in the winter of 1939/40 about the desperate atmosphere and the sad cityscape in Vilnius.

“By now I was already a skilled refugee, so I decided to go to ‘TOZ’.”

Marcel Weyland (born 1927 in Łódź) survived the Holocaust thanks in part to Sugihara Chiune (1900-1986), the Japanese consul in Kaunas. Thanks to him,…