On November 16, 1939, Owsiej Bułkin was the seventh refugee stranded in Vilnius who gave a report to the Komitet tsu zamlen materialn vegn yidishn khurbn in Poyln 1939 (Committee to Collect Material about the Destruction of Polish Jewry 1939) about his experiences of flight from Berlin to Vilnius which started with the Zbąszyń deportations in 1938 as part of the so-called “Poland action.” 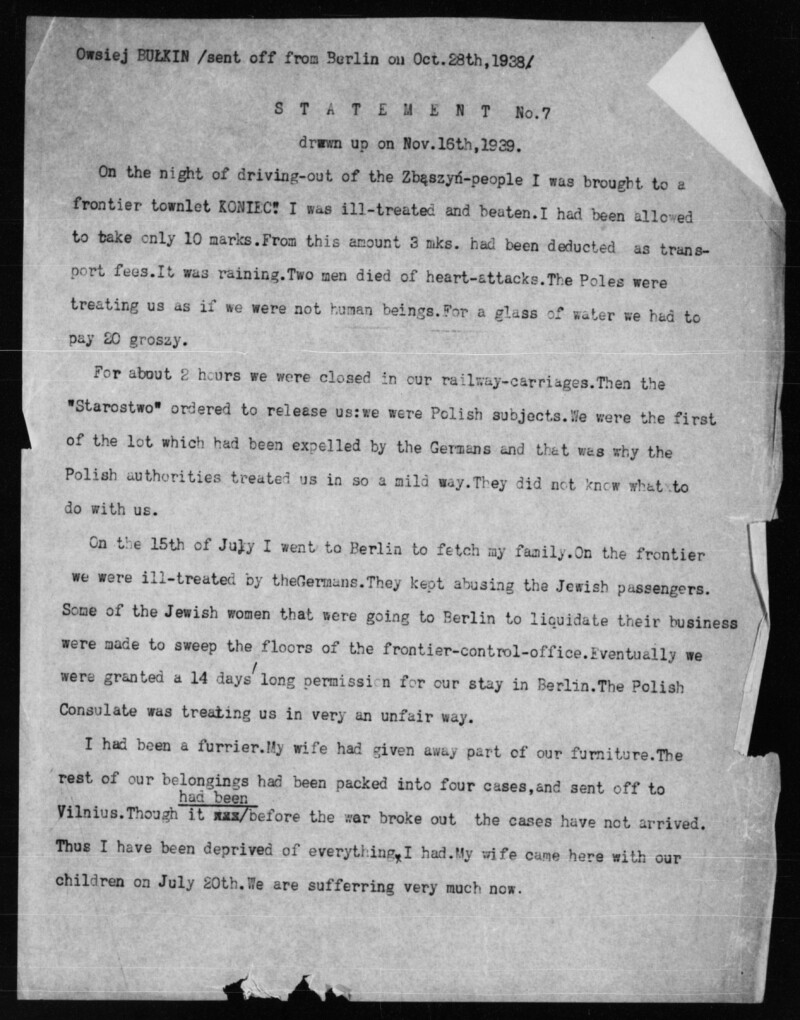 On the night of driving-out of the Zbąszyń-people I was brought to a frontier townlet KONIEC. I was ill-treated and beaten. I had been allowed to take only 10 marks. From this amount 3 mks. had been deducted as transport fees. It was raining. Two men died of heart-attacks. The Poles were treating us as if we were not human beings. For a glass of water we had to pay 20 groszy.

For about 2 hours we were closed in our railway-carriages. Then the “Starostwo” ordered to release us: we were Polish subjects. We were the first of the lot which had been expelled by the Germans and that was why the Polish authorities treated us in so a mild way. They did not know what to do with us.

On the 15th of July, I went to Berlin to fetch my family. On the frontier we were ill-treated by the Germans. They kept abusing the Jewish passengers. Some of the Jewish women that were going to Berlin to liquidate their business were made to sweep the floors of the frontier-control-office. Eventually we were granted a 14 days long permission for our stay in Berlin. The Polish Consulate was treating us in very an unfair way.

I had been a furrier. My wife had given away part of our furniture. The rest of our belongings had been packed into four cases, and sent off to Vilnius. Though it had been before the war broke out, the cases have not arrived. Thus I have been deprived of everything I had. My wife came here with our children on July 20th. We are suffering very much now.

At the end of October 1938, in what would set the paradigm for the following anti-Jewish measures by the Nazi State, about 18,000 of Polish Jews living in Germany were deported to Poland as part of the so-called “Poland action.” Many of them became stateless and were caught for months in a no man’s land on the border between the German Reich and Poland. 11Sybil Milton, “The Expulsion of Polish Jews from Germany October 1938 to July 1939. A Documentation,” in The Leo Baeck Institute Yearbook Vol. 29, No. 1, (1984) 169–199; 169ff. Among them was also Owsiej Bułkin, a Polish citizen who was living in Berlin at the time.

In his short report to the Komitet tsu zamlen materialn vegn yidishn khurbn in Poyln 1939 (Committee to Collect Material about the Destruction of Polish Jewry 1939), he retells his ordeal starting in 1938 with a deportation to the border town of Koniec and forcibly ending, for the time being, in Vilnius in 1939. At the time of his interview, Owsiej and his family had endured forced deportations, expulsions, and flight, antisemitic attacks and maltreatment from Germans and Poles and were stripped from all of their belongings.

“Jewish journalists in Vilna […] gathering the accounts of eyewitnesses of the evacuations of Warsaw, the destruction of cities and the flight from Poland”

Joint Funding Agreement for the “Project for Investigating the Destruction of Jewish Population in Poland and its Current Situation” of the YIVO, 20 November…

“When Łódź was behind me, I removed the yellow star – there, it was not required to wear it anymore.”

Protocol 79: Interview with Chaim-Leyb D. about his flight through Poland to Vilnius, December 1939

On 21 December 1939, Chaim-Leyb D. was interviewed by the “Committee to Collect Material about the Destruction of Polish Jewry 1939” about his flight…

“As there are now in Vilno refugees from all Jewish centres in Poland… .”

In November 1939, a group of Polish-Jewish refugee writers and journalists formed the “Committee to Collect Material about the Destruction of Polish Jewry 1939”…

Marcel Weyland (born 1927 in Łódź) survived the Holocaust thanks in part to Sugihara Chiune (1900-1986), the Japanese consul in Kaunas. Thanks to him,…

Polish-Jewish refugee journalists and writers having dinner in their dormitory in Sadowa Street 9, 1939/40.