Joint Funding Agreement for the “Project for Investigating the Destruction of Jewish Population in Poland and its Current Situation” of the YIVO, 20 November 1939.

“Jewish journalists in Vilna […] gathering the accounts of eyewitnesses of the evacuations of Warsaw, the destruction of cities and the flight from Poland” PDF 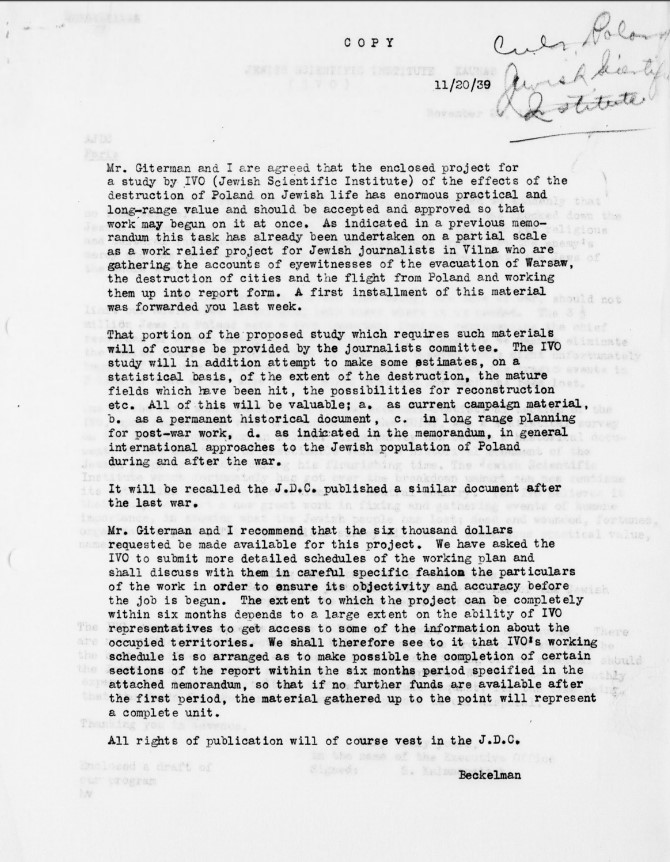 Mr. Giterman and I are agreed that the enclosed project for a study by IVO [sic] (Jewish Scientific Institute) of the effect of the destruction of Poland on Jewish Jewish life has enormous practical and long-range value and should be accepted and approved so that work may begun on it at once. As indicated in a previous memorandum this task has already been undertaken on a partial scale as a work relief project for Jewish journalists in Vilna who are gathering the account of eyewitnesses of the evacuation of Warsaw, the destruction of cities and the flight from Poland and working them up into report form. A first installment of this material was forwarded you last week.

That portion of the proposed study which requires such materials will of course be provided by the journalists committee. The IVO study will in addition attempt to make some estimates, on a statistical basis, of the extent of the destruction, the mature fields which have been hit, the possibilities for reconstruction etc. All of this will be valuable: a. as current campaign material. b. as a permanent historical document. c. in long-range planning for post-war work. d. as indicated in the memorandum, in general international approaches to the Jewish population of Poland during and after the war.

It will be recalled the J.D.C. published a similar document after the last war.

Mr. Giterman and I recommend that the six thousand dollars requested be made available for this project. We have asked the IVO to submit more detailed schedules of the working plan and shall discuss with them in careful specific fashion the particulars of the work in order to ensure its objectivity and accuracy before the job is begun. The extent to which the project can be completely [sic] within six months depends to a large extent on the ability of IVO representatives to get access to some of the information about the occupied territories. We shall therefore see to it that IVO’s working schedule is so arranged as to make possible the completion of certain sections of the report within the six months period specified in the attached memorandum, so that if no further funds are available after the first period, the material gathered up to the point will represent a complete unit.

All rights of publication will of course vest in the J.D.C.

This letter, written by Moses Beckelmann, delegate of the American Jewish Joint Distribution Committee (Joint) in Vilnius, informs the New York headquarters about the decision to fund a documentation and research project of the Yidishn visnshaftlekhn Institut (Jewish Scientific Institute, short: YIVO). The project was meant to be a continuation of the documentation project started by Polish-Jewish refugee writers and journalists with the help of the Joint and which today comprises the archive of the Komitet tsu zamlen materialn vegn yidishn khurbn in Poyln 1939 (Committee for Collecting Material on the Destruction of Jewish Communities in Poland 1939).

“There are now sufficient intellectuals in Wilna having come from Poland who will be the best qualified to carry out the collecting and listing of the material.”

On 20 November 1939, the YIVO in Vilnius approached the American Jewish Joint Distribution Committee with a funding request for the “Project of Investigations…

“I testify that they deserve the most honorable title […] they were human beings!”

Moyshe Mandelman on the support network and solidarity in Vilnius

In the chaos of war, Moyshe Mandelman (1895-1963) made it to Vilnius in 1940. He was particularly impressed by the local Jewish aid networks…

“In the midst of the terrible days of cold, they came.”

Benzion Benshalom tells of the harsh winter of 1939/40, which made life even harder for refugees in Vilnius and led to tragedies at the…

“Unfortunately, the beginning of Lithuanian rule was bitter for Jews.”

“The refugees see us as their brothers who have come to help them in times of need and tragedy.” PDF

Jewish Self-Help in Zbąszyń and its Legacies

A letter from Emanuel Ringelblum to Raphael Mahler