On 20 November 1939, the YIVO in Vilnius approached the American Jewish Joint Distribution Committee with a funding request for the “Project of Investigations into the Destruction of the Jewish Population in Poland and their present conditions” based on the initiative of Polish-Jewish refugee intellectuals.

“There are now sufficient intellectuals in Wilna having come from Poland who will be the best qualified to carry out the collecting and listing of the material.” PDF 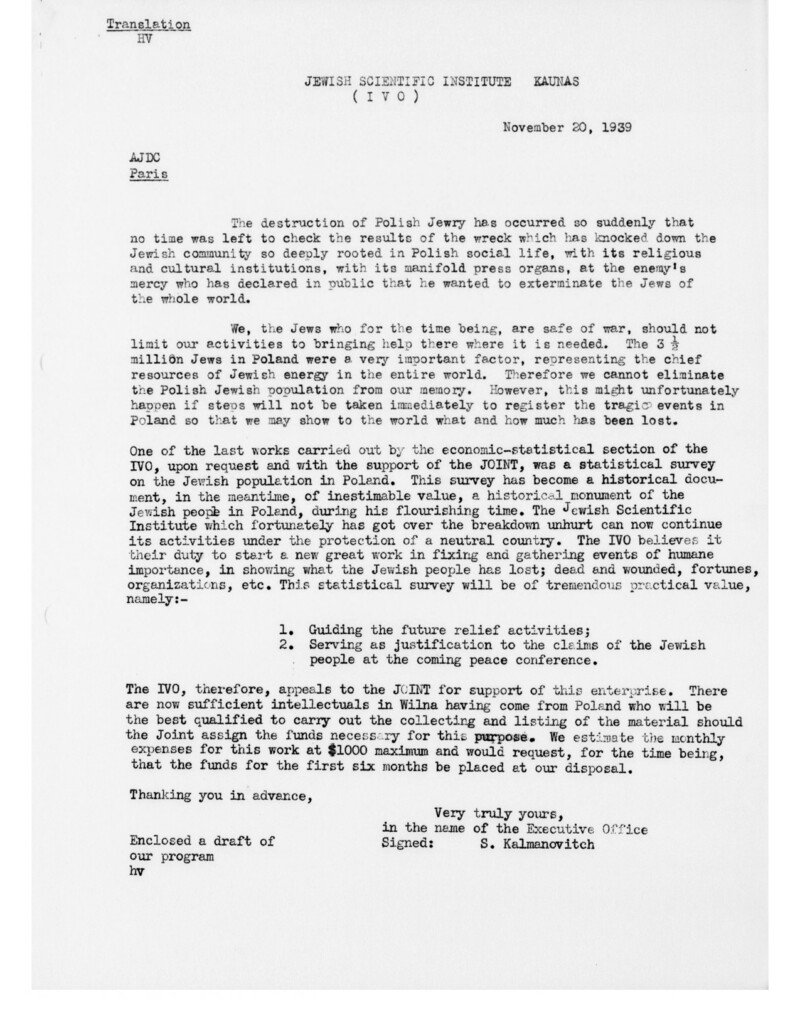 The destruction of Polish Jewry has occurred so suddenly that no time was left to check the results of the wreck which has knocked down the Jewish community so deeply rooted in Polish social life, with its religious and cultural institutions, with its manifold press organs, at the enemy’s mercy who has declared in public that he wanted to exterminate the Jews of the whole world.

We, the Jews who for the time being are safe of war, should not limit our activities to bringing help there where it is needed. The 3 1/2 million Jews in Poland were a very important factor, representing the chief resources of Jewish energy in the entire world. Therefore we cannot eliminate the Polish Jewish population from our memory. However, this might unfortunately happen if steps will not be taken immediately to register the tragic events in Poland so that we may show to the wolrd what and how much has been lost.

One of the last works carried out by the economic-statistical section of the IVO, upon request and with the support of the JOINT, was a statistical survey on the Jewish population in Poland. This survey has become a historical document, in the meantime, of inestimable value, a historical monument of the Jewish people in Poland, during his flourishing time. The Jewish Scientific Institute which fortunately has got over the breakdown unhurt can now continue its activities under the protection of a neutral country. The IVO believes it their duty to start a new great work in fixing and gathering events of humane importance, in showing what the Jewish people has lost; dead and wounded, fortunes, organizations, etc. This statistical survey will be of tremendous practical value, namely:

The IVO, therefore, appeals to the JOINT for support of this enterprise. There are now sufficient intellectuals in Wilna having come from Poland who will be the best qualified to carry out the collecting and listing of the material should the Joint assign the funds necessary for this purpose. We estimate the monthly expenses for this work at $1000 maximum and would request, for the time being, that the funds for the first six months be placed at our disposal.

Thanking you in advance,

in the name of the Executive Office

Enclosed a draft of our program

a. How many have been entirely wrecked?

b. How many have been partly wrecked?

a. How many were killed? (through bomb attacks, firesquads – shot by the Nazis, pogroms and diseases.)

b. Information about compulsory labor.

c. How many left their homes (voluntary or deported)

d. Where are they now? (present conditions and future plans).

b. Social organizations and parties

a. Documents of the Nazi legislation

b. Violences committed by German military forces and civil authorities

5. Social Work in the Towns

Exact details concerning all Jewish survivors in Wilna as well as present conditions of the Wilna residents and the newly arrived persons.

II. Means and Prospects of the Investigations

The monthly budget will be established as follows:

Travel expenses and expenses of the delegates      2000 Lit

On November 20, 1939 the Yidisher visnshaftlekher institut (Jewish Scientific Institute, short: YIVO) in Vilnius presents a project plan and budgetary breakdown for the “Project for Investigating the Destruction of Jewish Population in Poland and its Current Situation” to the American Jewish Joint Distribution Committee (Joint). The Joint agreed to fund the project and facilitated the creation of the Komitet tsu zamlen materialn vegn yidishn khurbn in Poyln 1939 – the earliest known Jewish documentation effort of the Holocaust in Eastern Europe iniated from Polish-Jewish refugee intellectuals in Vilnius. Although it is not clear in what way the YIVO and the Komitet cooperated, it is for sure that there was a cooperation. 11On the history of the Committee, see Schulz, Miriam, 2016: Before the Bow That Was Drawn: The Vilnius Komitet and its documentation of the destruction of Polish Jewry, 1939-1940/41. http://metropol-verlag.de/produkt/miriam-schulz-der-beginn-des-untergangs/.

“A great many refugees were separated from their families because mainly men and adult youths had fled.”

“Vilnius became the cradle of a new Jewish Renaissance.”

Mendel Balberyszski on the refugee situation in Vilnius, 1939

“Jewish journalists in Vilna […] gathering the accounts of eyewitnesses of the evacuations of Warsaw, the destruction of cities and the flight from Poland”

Joint Funding Agreement for the “Project for Investigating the Destruction of Jewish Population in Poland and its Current Situation” of the YIVO, 20 November…

“Unfortunately, the beginning of Lithuanian rule was bitter for Jews.”

“Furthermore, where should I go now? To America?”

Mendel Balberyszski on the difficult decision to keep fleeing