The expectations of refugees who come to Germany are high: they should integrate, learn the language, build a new life for themselves and at the same time work through the traumas of war and flight. In the article of the series “Peace between Here and There” of the kohero magazine, the author writes about her culture shock in Berlin and the burden of her past. 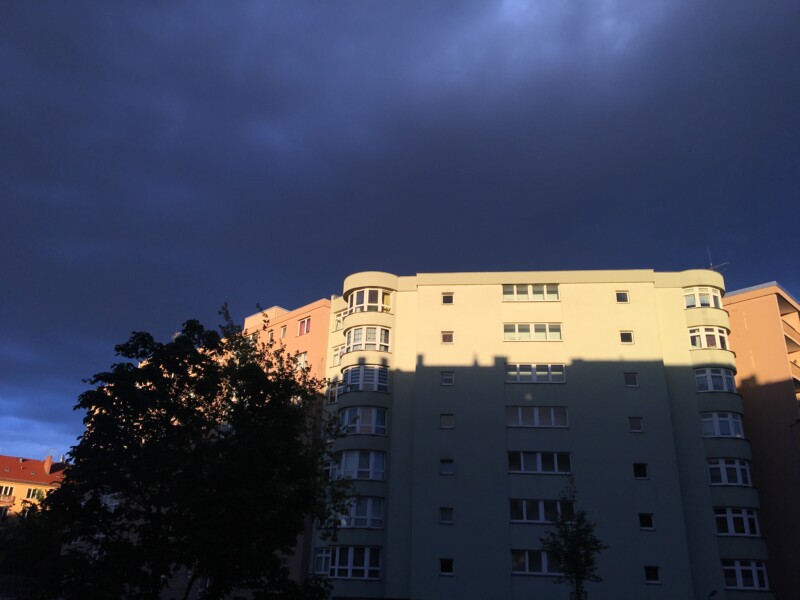 I have a thousand stories in my head about Berlin. I admit that I broke many shackles here and wrote the first letters of my personality. Today I remember the time when I was nineteen years old. I remember the great joy when I went out after midnight and wore only cheap pyjamas, of poor quality and very colorful. With uncombed hair I went out and walked around in one of the squares in Berlin.

Today I look back and amuse myself about my behavior at that time. Sometimes I think that what I did was wrong and that I was a little crazy. Then I say to myself again: It’s my right to do and not to do what I want. It is my right that those who set the standards and get hold of people have robbed me of.

When I thought of that, I was sitting on the train directly behind the driver’s cab. At a certain station, the train driver got off to help a disabled person get on. Strangely enough, however, he did not let him get on because he did not understand where this person wanted to go. The train driver suddenly shouted loudly through the loudspeaker: “Stay back! Stay back!” The woman sitting next to me asked her husband what was wrong with the conductor. Her husband tried to give her an explanation for the behavior of the railroad conductor: “Det is Berlin.”

But what about the culture shock? What about the visions, the nightmares, the worries and sleepless nights? What does it all mean? Rattle, rattle, rattle… We, the children of war, are traded cheaply like a commodity! By the warmongers, their middlemen and also the press immediately afterwards. Namely by those who abuse our narratives, our images and our fates. What do we get out of it? Nothing! Because we get nothing of what we need most. What we need is stability and a sense of security. But what about our psychological security?

Here the train does not wait for you

If I had mastered the language of finance and the times of yesteryear, I would certainly have done something different in my career. But at that time I was busy with other things and was looking for a different meaning. I cannot determine the value of what I did today. Today everyone talks about values and principles, but who still sticks to values and principles?

This is Berlin. Yes, actually, that is Berlin. Here the train doesn’t wait for you in the morning when you’ve overslept. Nobody cares if you overslept the morning on purpose or had something else in mind. No one will or wants to know.

This is Berlin. The sirens in Berlin don’t go silent, even if the streets are empty or the night is late. This city constantly needs a savior.

As if we were aliens

I have stopped counting the years so that I feel the burden less. This way I could make “integration” easier for me. I erased my house from my memory and also removed all memories that stood in my way. There, time was slower and lighter. I could even say today that time stopped without me noticing it. The bitter truth that jumps into my face is death. There I would be killed. In one way or another. Here I am motivated to kill myself, with the difference that here I have the choice of how I do it.

And now, after the bitter struggle between the here and there, I decided, at the age of 25, to live here in peace and quiet and stay away from the consumers of our stories. From those who talk about us as if we were aliens or strangers who landed on the European continent to be abused as guinea pigs.

The anonymous author’s text deals with the feeling of othering that she experiences in Germany. “We, the children of war, are traded cheaply like a commodity! By the warmongers, their middlemen and also the press immediately afterwards. Namely, by those who abuse our narratives, our images and our fates,” writes the anonymous author, thereby criticizing the media debate about fugitives. They – fugitives – need protection and stability, she writes, and they don’t get this in Germany. She also deals with the topics of loneliness in the metropolis (“Here the train doesn’t wait for you in the morning if you’ve overslept”) and traumas of war and flight, for which she can find no channel in Germany for coming to terms with, constantly under pressure of having to “integrate” well into German society.

More about the project “Peace between Here and There

“Peace between Here and There” is a writing workshop project of the Peace Circle Syria. The association advocates a peaceful and cooperative exchange between people and creates exchange platforms for a constructive dialogue.

The texts have already been published in the taz in a modified form. The project was carried out in cooperation with bi’bak, Start with a Friend (SwaF) and Multaka (Treffpunkt Museum) in Berlin and is supported by the Frauen ID Projekt within the Kultur macht Stark Förderprogramm / PB and BMBF.

In seven days of workshops, the participants, led by the Syrian author Kefah Ali Deeb, explored the method of writing. Part of the project were visits to several Berlin museums, some of which are reflected in the women’s stories. The result are texts about the new living environment in Berlin, about home and about the “Peace between Here and There”. More about the project can be found on the kohero magazine page (in German).

M.Sh.: “Det is Berlin.”, published in German in kohero Magazine, created in the context of the project “Peace between Here and There”. Published here with kind permission of kohero Magazine.

Related items from the Archive 5

“I no longer wait for anything in the future”

In an interview, Widad Nabi describes what the words home and future mean to her.

H. comes from Somalia and lives in Italy today. Together with other Somali refugees he took part in a round table discussion of the…

In an interview, the writer Widad Nabi speaks about what Berlin means to her.

“We are expellees, banished”

Bertolt Brecht: On the Term Emigrants (1937)

Bertolt Brecht’s poem on the difference between emigration and exile