First Alaa Muhrez and her husband moved to a village near Leipzig, then they moved to Berlin. Alaa describes experiences of discrimination that she experienced in everyday life and at work when she was looking for a job. 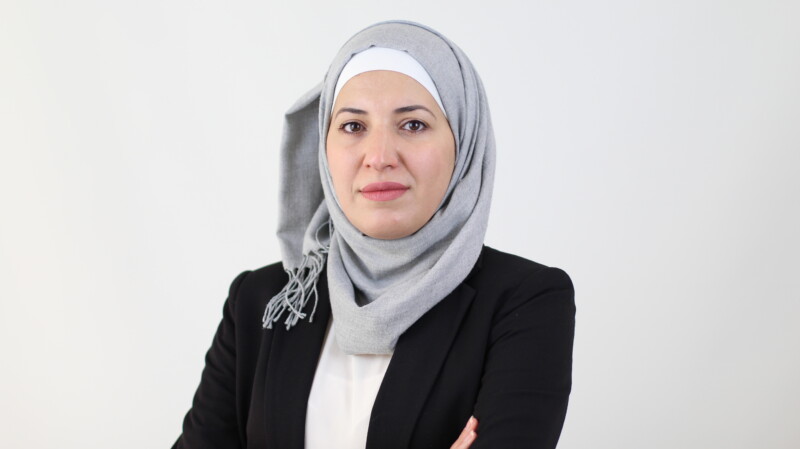 They bought us a ticket and I went to Leipzig with my husband. We stayed there for more than a year. […] We were not in the city, but in a small village. But that was not such a great experience, because I was a joke between the people in the village. They were always laughing at us, pointing at us and stuff. I don’t think they had ever seen a woman wearing a headscarf. I was the only one. First we lived in a reception camp, then they gave us an apartment when we got the residence [title]. They said: “refugee”, “are you Arab or what?” My German wasn’t very good either, I only learned German at home because the school was an hour away by train. Here in Berlin one hour is normal, but in the village it is hard because the bus comes only once an hour and the train comes too. When it is gone, I wait three hours on the street. […] That was a difficult time: you don’t see nice people. Even when we went shopping, they looked at me strangely. It’s better for me in Berlin because it’s multicultural.

But I also want to talk about an experience I had in Berlin. It was really a pushback for me. I applied to a bank in Berlin for an apprenticeship as a bank clerk. They sent me an invitation for a job interview. When the employee saw me for the first time, she was surprised – I don’t know why, maybe because of the headscarf. They didn’t greet me; I stretched out my hand and she said: ‘Not now, when you leave’. All the time they were asking me questions that had nothing to do with the work: ‘Do you have friends in Berlin? Where do you go with your friends? What do you do with your friends?’ They gave me an exam, and I did the whole mathematical test. And after the interview they said: ‘The training is only for Germans and you don’t have a personality. […] You should work in the day care center.’ But I can’t work in the daycare center with my certificates because I don’t have a degree and I need certificates for the daycare center. […] After this experience I did a psychotherapy. Because I was very enthusiastic at the beginning, thought I spoke German and could do it. Afterwards I was so disappointed. She didn’t even greet me, although a greeting is the first step.

I don’t always like to say: The others are to blame. Maybe I did something that I didn’t mean, maybe they misunderstood me. But I don’t always like to play this role: The role of the victim. I just don’t understand it. If someone doesn’t hurt me, why should I hate him? But I think that it is a good experience for me. Not everybody loves me. That’s how it is.

One person, that means: many experiences, many thoughts, many feelings. When they say that someone is a refugee, it means that he is poor, he has no money, he has no certificates or these are worth less than in Germany. There are many prejudices, I have felt that. If someone has these thoughts about refugees, he should talk to them and then he can make a judgement.

In the wake of the crisis in Syria, Alaa Muhrez and her husband fled to Egypt after 2013. After the installation of the new president in Egypt, the problems for fugitives increased there. It became more and more difficult to find work, so Alaa and her husband decided to go to Germany. From Egypt to Italy she and her husband went by a small boat with 400 other people on it. They changed the boat several times. “If you got up, you couldn’t sit down again,” explains Alaa, that’s how crowded it was. After the dangerous journey, they arrived in Catania, Sicily. There their personal details were recorded. They knew that it could be difficult to apply for a residence permit in Italy to continue their journey, so they did not wait for their papers to be received.

They arrived in Austria by plane and from there to Munich. From Munich they were brought to Leipzig, and they were assigned an apartment in a nearby village. Alaa reports several incidents of discrimination she had to experience there. After more than a year, they came to Berlin, where after some time they found an apartment and work. Alaa talks about the experiences of discrimination that she had to make in her everyday life in Leipzig and Berlin, and about her application procedure in a Berlin bank, where she was confronted with racism.

“I have often been asked the question: ‘Yes, when everything is over, do you want to go back to Turkey and live there?'”

Because of his political and journalistic activities, İsa Artar came under state pressure and police observation in Turkey. Before he was sentenced to a…

“Whether I can stay and how things will continue for me is completely open.”

Somayeh Rasouli, who fled to Berlin from Afghanistan, reports on the difficulties that arise with “little prospect to remain” in building a new life…

“Through his name he becomes conspicuous”

“Through his name he becomes conspicuous”

“My German failed because of the ‘integration dilemma’: I had a job, but was missing from the language course”

Please explain to me what integration is

“You had to make the decision: Either you live, so go on, or turn around and have a shitty life again.”

At the age of 14, Mahdi A. decided to leave Iran and flee to Europe. He tells why he decided to flee, about the…

“Our neighborhood also held together. No matter what nationality.”

Selafet Hizarçi came to Germany from Turkey in 1969, where she immediatly began to work, learn the language and lateron started a family. Within…

“This asylum status was also important for me because I always felt a lack of identity.”

Because of his political and journalistic activities, İsa Artar came under state pressure and police observation in Turkey. Before he was sentenced to a…

“Nobody gives up their cities voluntarily, cities are robbed”

Seven Reasons to Fall in Love with Berlin