Hilde Marx (1911-1986) was a German-American poet, writer and journalist. She is one of the authors whose writing career was only just beginning when the National Socialists came to power in Germany in 1933, and was immediately prevented by them. As a Jew, however, she had already been affected by anti-Semitism before that. When the Gestapo threatened her with imprisonment in a concentration camp in 1937, she escaped to the Czech Republic, and from there she managed to emigrate to the USA a year later. She arrived in New York in November 1938. Although she had to make ends meet with hard jobs, she tried to gain a foothold in the U.S. as a writer, too – an undertaking in which she, as a woman, faced particularly large obstacles. In this letter, she asked the American Guild for German Cultural Freedom for support.

“I guess you know how much I care about this work of mine and how hard it is on the other hand to keep going and work in this field at the same time.” PDF 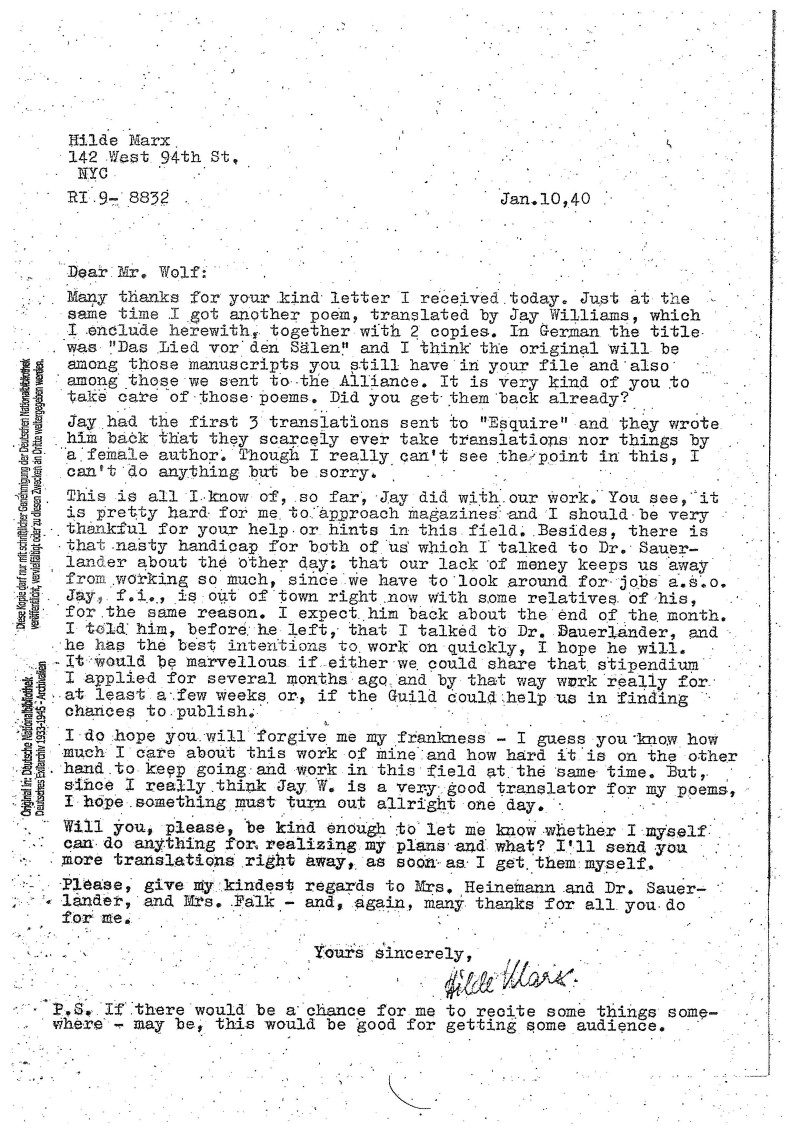 Many thanks for your kind letter I received today. Just at the same time I got another poem, translated by Jay Williams, which I endclude herewith, together with 2 copies. In German the title was „Das Lied von den Sälen“ and I think the original will be among those manuscripts you still have in your file and also among those we sent to the Alliance. It is very kind of you to take care of those poems. Did you get them back already?

Jay had the first 3 translations sent to „Esquire“ and they wrote him back that they scarcely ever take translations nor things by a female author. Though I really can’t see the point in this, I can’t do anything but be sorry.

This is all I know of, so far, Jay did with our work. You see, it is pretty hard for me to approach magazines and I should be very thankful for your help or hints in this field. Besides, there is that nasty handicap for both of us which I talked to Dr. Sauerlander about the other day: that our lack of money keeps us away from working so much, since we have to look around for jobs a. s. o. Jay, f. i., is out of town right now with some relatives of his, for the same reason. I expect him back about the end of the month. I told him, before he left, that I talked to Dr. Sauerlander, and he has the best intentions to work on quickly, I hope he will. It would be marvellous if either we could share that stipendium I applied for several months ago and by that way work really for at least a few weeks or, if the Guild could help us in finding chances to publish.

I do hope you will forgive me my frankness – I guess you know how much I care about this work of mine and how hard it is on the other hand to keep going and work in this field at the same time. But, since I really think Jay W. is a very good translator for my poems, I hope something must turn out allright one day.

Will you, please be kind enough to let me know whether I myself can do anything for realizing my plans and what? I’ll send you more translations right away, as soon as I get them myself.

Please, give my kindest regards to Mrs. Heinemann and Dr. Sauerlander, and Mrs. Falk – and, again, many thanks for all you do for me.

P.S. If there would be a chance for me to recite some things somewhere – may be, this would be good for getting some audience.

Hilde Marx (1911-1968) was a German-American poet, writer and journalist. She is one of the authors whose writing career was only just beginning when the National Socialists came to power in Germany in 1933, and was immediately prevented by them. As a Jew, however, she was already affected by anti-Semitism before that. She already experienced what it meant to be Jewish at the Humanist Gymnasium. After graduating from high school in 1931, Hilde Marx began studying journalism, theater and art history in Berlin. After five semesters, however, she was forcibly de-registered, as Jews were no longer allowed to attend universities. While she was still able to publish for newspapers at “Ullstein,” “Mosse” and the “Berliner Tageblatt,” this was no longer possible after their “Aryanization”. She was left only with Jewish publications, such as “Die Monatsblätter des jüdischen Kulturbundes in Deutschland,” “Die Jüdische Revue,” “Das Jüdische Gemeindeblatt,” and above all the “C.V.-Zeitung”. 11“Central Verein-Zeitung. Blätter für Deutschtum und Judentum. Organ des Central-Vereins deutscher Staatsbürger jüdischen Glaubens e.V. Allgemeine Zeitung des Judentums.” The CV-newspaper was one of the most important Jewish weekly newspapers in the German-speaking world and appeared from 1922 until it was banned in 1938.

She did not think about emigration for a long time, but when the Gestapo threatened her with imprisonment in a concentration camp in 1937, she fled to the Czech Republic, and from there she managed to leave for the USA a year later. In November 1938 she arrived in New York. She worked in various jobs: as a nurse for the elderly, a saleswoman, a nanny and a gymnastics trainer. However, in addition to these demanding jobs, she also tried to gain a foothold as a writer in the USA. To this end, she asked the American Guild for German Cultural Freedom for help.

In a January 1940 letter to the Guild, she reports on the status of translations of her poems and her attempts to publish them in American journals. She also describes the particular hurdles she encountered in doing so as a woman. Even though she did not receive the scholarship and the Guild could only help her publish one of her poems in an American magazine, Hilde Marx managed to establish herself in the USA as a writer and publicist.

In 1943 she received American citizenship. In America she continued to perform as a lecture artist, with her own “One woman show” in which she combined serious with light-hearted, Jewish with Christian traditions.

In 1951, a final volume of poems from 1938 to 1951 was published under the title “Bericht,” which incorporated her experiences as an exile. She became a member of Auslands-PEN and, from the 1960s on, was an editor of “Aufbau”, 22“Aufbau”: In 1934, the first “Aufbau. Nachrichtenblatt des German-Jewish Club, Inc., New York” appeared. Initially more a club and advertising organ, the “Aufbau” soon became a news sheet about the everyday life of German (not only Jewish) emigrants in exile. This meant advice on legal matters, explanations of the New York subway system, language courses and job vacancies, tips on dealing with authorities, etc. Oskar Maria Graf and Nelly Sachs, Lion Feuchtwanger and Thomas Mann, Mascha Kaléko and many others wrote here. for which she wrote primarily theater and film reviews, as well as short biographies of Jewish emigrants. She also worked for other newspapers, such as “This Day from St. Louis,” “The Chicago Jewish Forum,” the state newspaper and “Herold from New York”.

“The Gestapo had put a gun to my cheast.”

Hilde Marx: Escape to the USA

“The women managed to feed themselves and their husbands while studying, and they didn’t cut faces.”

“Nevertheless, my sense of responsibility forbids me to register with you for the emergency list – I am better off than unfortunately many others, because I still have honest hope in me.”

Hilde Marx (1911-1986) was a German-American poet, writer and journalist. She is one of the authors whose writing career was only just beginning when…

“We have never been ‘refugees’ as we are now.”

Mascha Kaléko about serious material concerns as a refugee in New York, 1941

“These people want to silence me and that will not happen.”

Nazeeha Saeed, a journalist from Bahrain who lives in Paris and Berlin in exile since 2016, speaks about her journalistic work in Bahrain and…

“The first months absorbed all our strengths to build a new life.”

Social Democratic politician Elsbeth Weichmann (1900-1988) describes her arrival and the first months in the French capital in 1933, after she had to flee…