In November 1939, a group of Polish-Jewish refugee writers and journalists formed the “Committee to Collect Material about the Destruction of Polish Jewry 1939” in the temporary safe haven of Vilnius with the financial help of the American Jewish Joint Distribution Committee. In March 1940, the committee approached the Joint anew with a request for continuing support of their activities. This document is the only known confidential self-disclosure by the committee summarizing the present and future objectives as well as methodology of this project by refugees with refugees for what was identified as the “Jewish nation.”

“As there are now in Vilno refugees from all Jewish centres in Poland… .” PDF 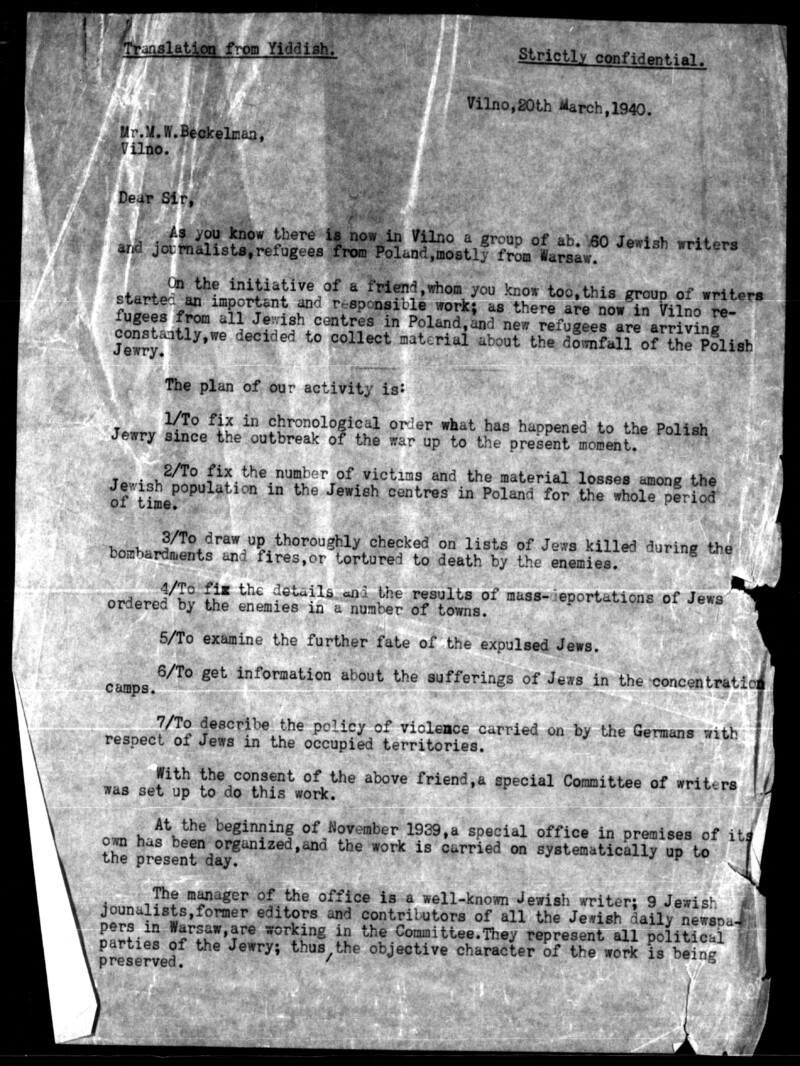 As you know there is now in Vilno a group of ab. 60 Jewish writers and journalists, refugees from Poland, mostly from Warsaw.

On the initiative of a friend, whom you know too, this group of writers started an important and responsible work: as there are now in Vilno refugees from all Jewish centres in Poland, and new refugees are arriving constantly, we decided to collect material about the downfall of the Polish Jewry.

The plan of our activity is:

1/ To fix in chronological order what has happened to the Polish Jewry since the outbreak of the war up to the present moment.

2/ To fix the number of victims and the material losses among the Jewish population in the Jewish centres in Poland for the whole period of time.

3/ To draw up thoroughly checked on lists of Jews killed during the bombardments and fires, or tortured to death by the enemies.

4/ To fix the details and the results of mass-deportations of Jews ordered by the enemies in a number of towns.

5/ To examine the further fate of the expulsed Jews.

6/ To get information about the suffering of Jews in concentration camps.

7/ To describe the policy of violence carried on by the Germans with respect to Jews in the occupied territories.

With the consent of the above friend, a special Committee of writers was set up to do this work.

At the beginning of November 1939, a special office in premises of its own has been organized, and the work is carried on systematically up to the present day.

The manager of the office is a well-known Jewish writer; 9 Jewish journalists, former editors and contributors of all the Jewish daily newspapers in Warsaw, are working in the Committee. They represent all political parties of the Jewry; thus, the objective character of the work is being preserved.

The work is carried on in the following way:

On the basis of lists of refugees, now in Vilno, we ask every day several refugees to visit our offices; we choose them according to towns and localities they are coming from. The invited persons give evidence, and on the basis of their accounts special records are drawn, signed by the resp. person after the statement has been read to him. Information given by every witness is being controled [sic] by statements made by other persons from the same locality. We retain also documents which may be interesting for our activity, or make copies and photographs of them.

Up to the present day we have taken evidence of ab. 400 persons (rabbis, members of Kehillah’s and Municipal Councils, leaders of economic and professional organizations, people active in the cultured field, lawyers, physicians etc.). Three hundred records are ready, consisting of 4000 typed sheets. You are already in possession of a part of these documents.

On the basis of these records, short reports about the “Situation of Jewish centres in Poland in time of war in 1939” are made. You are in possession of a certain number of these reports too.

Further, on the basis of records we are preparing bulletins, which give a complete picture of events in a given town, or deal in detail with a particular problem. We have sent you already 6 of such bulletins.

Besides, you are in possession of several photographs of important documents. The remaining records and documents are being typed, and you will receive them in the near future.

As we want our material to be quite complete, we are working now at full speed and we are taking evidence of more and more persons. F.I. [for your information]: 600 well-known Jewish personalities were shot in Przemysl; we know the names of several dozens of them, but we are working to get all the other names too. The crimes commited [sic] against hundreds of thousands of jews are unprecedented in modern history; information about them in the press were not exact, very often untrue; we have nothing to do with such reports. Our aim is to have detailed evidence, like in a legal inquest, reports of an extreme accuracy, documents with figures and names, thoroughly verified.

People with news and documents about the situation of Jews in the occupied areas are arriving the whole time; the examination of the above provides us with important material illustrating the persecution of Jews and the decrees which are enacted from time to time and which are aiming at the extermination of millions of Jews in a part of the occupied territories. We are also endeavoring to get information about Jewish communities in the occupied areas which did not suffer from the war operations and from special persecution; we want to know what is going on with the Jews in these places.

To our regret, we are obliged to do our work in very difficult circumstances. We want to point out those difficulties which concern your organization.

When we started the work, our common friend has not fixed a regular budget for us; each month we had to negotiate, and we did not know whether we would be able to pay the very modest renumeration for this responsible

We have not received as yet the balance of our February budget. In March, the whole staff is working without being certain of its renumeration. We are stressing this not from the point of view of personal interest, but simply from the standpoint of our activity and of our interests. The expenses of our budget intend also to provide for the sums we pay for stationary, typewriting, rent etc.

The significance of the material we collect is, in our opinion, as follows:

1/ The material gives the possibility to learn in detail what is the fate of the several millions of Polish Jews.

2/ It will be usefull [sic] for the future historical searcher who will write the history of Jews in the present terrible period.

3/ The material may be used as a weapon in the fight against the oppressors and persecutors.

4/ It will be used as a foundation of the demands of the Jewish nation at the future peace-conference.

Therefore, we consider it as necessary to approach you with the following request:

1/ To provide our office with a fixed budget of 3500 – 5000 Lits a month, so that we might continue our work in a quite and normal way, and even extend it.

We allow ourselves to ask you to have this matter clarified with your head-office in New York, and to give us an answer at your earlier convenience.

You will also recall that our whole work is of the most confidential nature. In the press there should not be any word about our office and the persons that are working in it; when publishing the materials, it should not be mentioned that they are coming from Lithuania.

In the months following the German attack against Poland in September 1, 1939, several thousand Polish Jews escaped from German and Soviet occupation to the now-neutral Lithuania with its regained capital of Vilnius. The demographics of the Polish-Jewish refugee society in Vilnius was diverse and represented all social strata of Polish Jewry. At the same time, Vilnius housed an unprecedented number of Polish Jewish intelligentsia, among them the members of the “Committee to Collect Material about the Destruction of Polish Jewry 1939.” This committee was formed in November 1939 with the financial support of the American Jewish Joint Distribution Committee and in cooperation with the Yidisher visnshaftlekher institut (YIVO) and represents one of the earliest Jewish efforts in Eastern Europe to document Nazi crimes in occupied Poland resuming the modern Eastern European Jewish historiographical tradition of khurbn-forshung (destruction research). It was run by refugee writers and journalists and was fully dependent of the cooperation with the Jewish refugee society stranded in Vilnius.

In March 1940, amidst changing migration and refugee politics in Lithuania, the committee approached the Joint with a renewed grant proposal. This document represents the only self-disclosure of the committee itself and provides insights into their methodology, challenges, and objectives. It is also testament to Jewish identity construction and defense in the face of the incipient Holocaust, speaks to visions of a the future and the imagined seat at the table at the future peace-conference, and highlights the importance of migratory knowledge as a critical source to document crimes against humanity in the here and now and for future historical research. Thus, migratory knowledge and documentation together are not only a cradle of migratory resistance but also vehicles towards transitional justice.

“There are now sufficient intellectuals in Wilna having come from Poland who will be the best qualified to carry out the collecting and listing of the material.”

On 20 November 1939, the YIVO in Vilnius approached the American Jewish Joint Distribution Committee with a funding request for the “Project of Investigations…

“By now I was already a skilled refugee, so I decided to go to ‘TOZ’.”

“Through his name he becomes conspicuous.”

“Through his name he becomes conspicuous.”

“There are no words for my suffering.”

On 24 June 1941, Kruk writes about his discouragement regarding his futile attempts to leave Vilnius for the USA shortly after the German attack…

On November 16, 1939, Owsiej Bułkin was the seventh refugee stranded in Vilnius who gave a report to the Komitet tsu zamlen materialn vegn…