Alice Salomon’s life is described in this statement and the reasons she requires financial assistance from the American Guild for Cultural Freedom. The statement also describes what she has done in her life and who she was friends with.

“At the age of sixty-six, and with little physical strength, she is endeavoring to readjust her life.” PDF 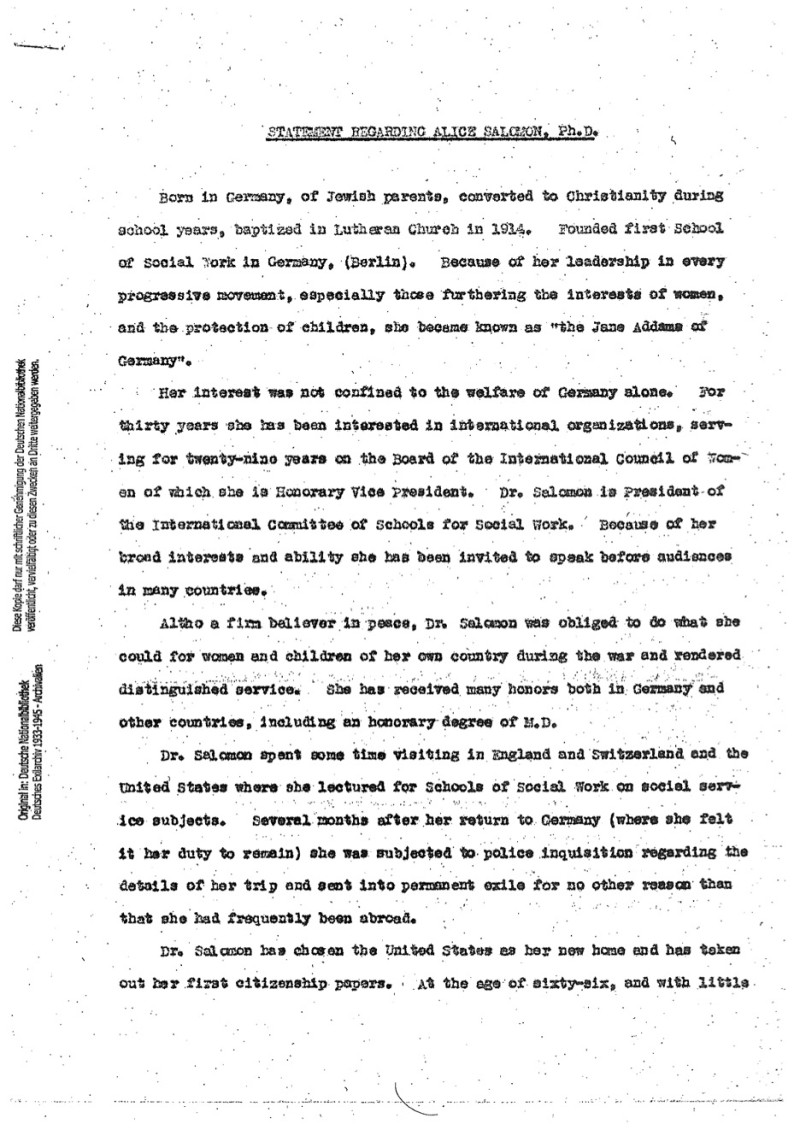 Born in Germany, of Jewish parents, converted to Christianity during school years, baptized in Lutheran Church in 1914. Founded first school of social work in Germany, (Berlin). Because of her leadership in every progressive movement, especially those furthering the interests of women, and the protection of children, she became known as “the Jane Addams of Germany”.

Her interest was not confined to the welfare of Germany alone. For thirty years she has been interested in international organization, serving for twenty-nine years on the board of international Council of Women of which she is Honorary Vice President. Dr.Salomon is President of the International Committee of Schools for Social Work. Because of her broad interests and ability she has been invited to speak before audiences in many countries.

Altho a firm believer in peace, Dr.Salomon was obliged to do what she could for women and children of her own country during the war and rendered distinguished service. She has received many honors both in Germany and other countries, including an honorary degree of M.D.

Dr. Salomon spent some time visiting England and Switzerland and the United States where she lectured for schools of social work on social service subjects. Several months after her return to Germany (where she felt it her duty to remain) she was subject to police inquisition regarding the details of her trip and sent to permanent exile for no other reason than that she had frequently been abroad.

Dr. Salomon has chosen the United States as her new home and has taken out her first citizenship papers. At the age of sixty-six, and with little physical strength, she is endeavoring to readjust her life. She is completing an autobiography to be published by the Oxford Press. Because of her small income she has insufficient margin for secretariat service and other help needed from time to time.

Dr. Salomon has many friends in the United States These include Lillian Wald, Mrs. Carrie Chapman Catt, Mr. James G. Macdonald and many others. Miss Jane Addams and Mrs. Anna Garlin Speneer were friends of Dr. Salomon for many years.

Alice Salomon (1872-1948), born in Berlin,  was a German liberal social reformer of jewish origin. She had wanted to become a teacher, but was not able to go to university, due to educational rules for women from her social standing. In 1983 this rule changed and she studied history, philosophy and economics at the Friedrich Wilhelm University from 1902-1906. Salomon made it her life’s mission to help and educate women while supporting the international Women’s movement. She was part of the Mädchen- und Frauengruppen für soziale Hilfsarbeit, which she took over in 1899. She was also part of the Bund Deutscher Frauenvereine, of which she became the chairwoman in 1900. She became a doctor of philosophy in 1906 with her dissertation namely “Die Ursachen der ungleichen Entlohnung von Männer- und Frauenarbeit”. She became the secretary of the International Women’s council in 1909. In 1920 she stopped her work with the BDF due to anti semitic propaganda, and went on to found the Deutsche Akademie für soziale und pädagogische Frauenarbeit.

She fled Germany in 1937 after being told to do so by the Gestapo, or else she would face incarceration. Some reasons for this may include her jewish origin and international involvement. She emigrated to the United States and her German citizenship was revoked. As she moved very late in life, it was hard for her to adjust, as described in this letter. She was never able to complete her Autobiography, although her memoirs were published in 1983.

The American Guild for German Cultural Freedom was an organization that helped German artists, writers and intellectuals in exile whose ability to work was affected by the facist government in Germany. The goal of the organization was to help keep German culture alive outside of Germany, as it was unable to survive and prosper within its borders. The American Guild for German Cultural Freedom helped these people through financial aid. The refugee experience of the German exiles varied for each individual. One of the main struggles of refugeedom is the adaptation to a completely new place and finding a support system. The American Guild for German Cultural Freedom tried to help German exiles with that adaptation, so that they would be able to simultaneously also focus on their work.

The Arrival of Hannah Arendt

This film describes the arrival of Hannah Arendt - a Jewish, German-American political theorist and publicist - in New York and her reflections on flight and helping people start over.

“…and then asked my profeshun. I didn’t know what to tell her. In Lublin, I was a student…and here? “

Rivke Zilberg and the Council of Jewish Charity Women

In the course of the National Socialist racial policy, Hertha Nathorff lost her license to practice medicine in 1934 and her medical license in…

“We are extremely sorry to have to inform you that the Board of Directors has unfortunately not been able to grant your request for a scholarship, as the European problems are too much in the foreground.”

“I have not heard from you and from the Academy for months.”

In this letter Anna Seghers asks Prince Löwenstein why he has not gotten back to her, even though he said that he would get…

Hilde Marx: Ballad for a farewell

Hilde Marx (1911-1986) was a German-American poet, writer and journalist. She is one of the authors whose writing career was only just beginning when…

“… as soon you earn your first dollar, you’re an American; you’re practically a seeteezen.“

Fred Grubel feels like an American in New York

Fred (Fritz) Grubel (formerly Grübel in Germany) was born in Leipzig in 1908. He studied in Leipzig,Frankfurt and received a doctorate in law. He…

“I still maintain today that each of us, I do not exclude myself, has taken away some damage. A trauma that for some is so bad that they end up in a sanatorium somewhere, or worse: suicide.”

Hilde Marx: Flight as a break in life