Agricultural Training: Escape to the Kibbutz

The “Jüdische Jugendhilfe” (Jewish Youth Aid)  was founded on 30 January 1933 out of a group of Zionist youth organisations. It organised the emigration of young Jewish people to Palestine (Youth Aliyah). The “Jüdische Jugendhilfe” offered young Jewish people a paid education in kibbutzes, which made it possible for thousands to escape from Germany.

After a short preparatory period near Berlin, Ernst Loewy was also found suitable, and his parents signed the contract on 01 March 1936. 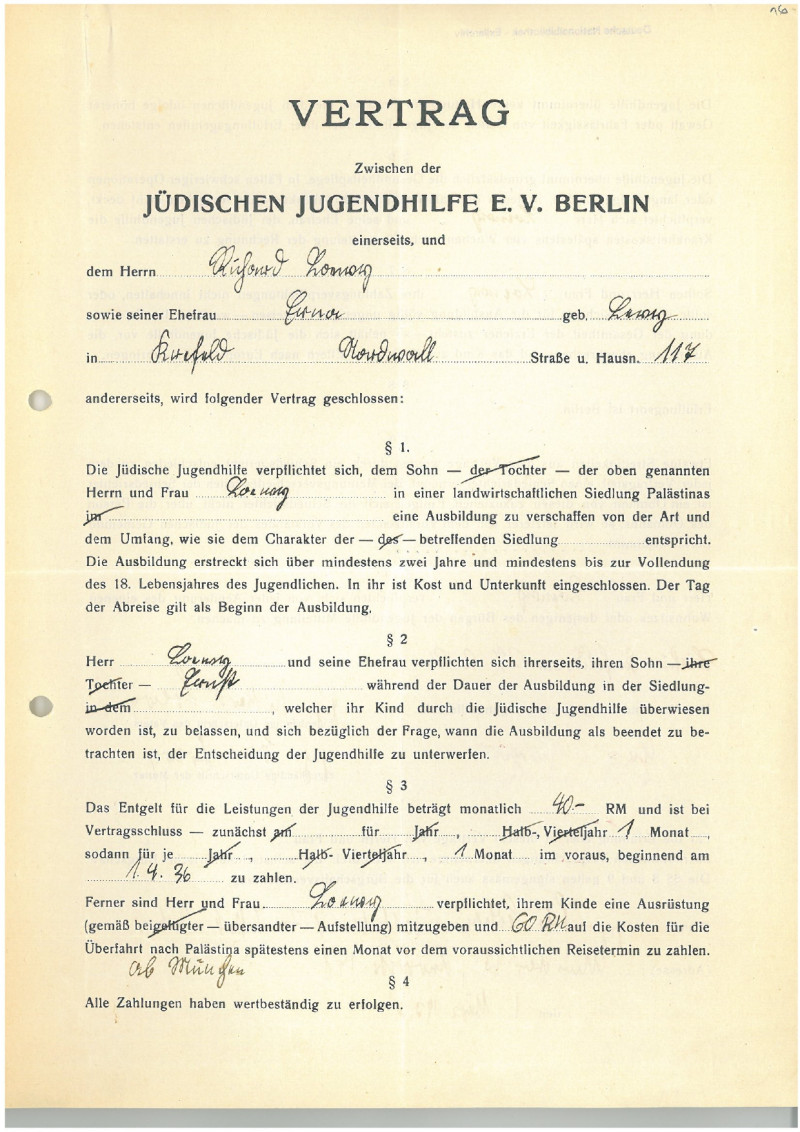 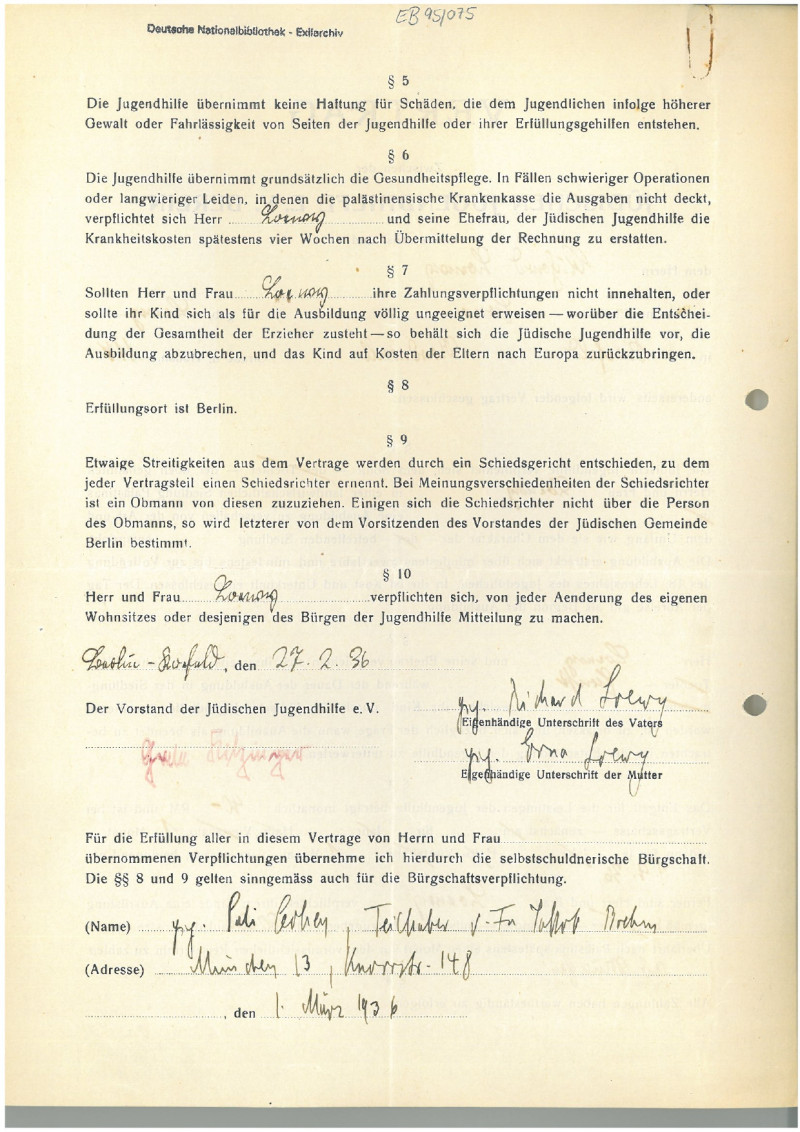 Ernst Loewy was a German-Jewish librarian, publicist and exile researcher. He was a co-founder and chairman of the “Gesellschaft für Exilforschung” (Society for Exile Research).

As a schoolboy, Ernst Loewy experienced anti-Semitism even before 1933. In autumn 1935, his parents decided that he should leave Germany. After a four-week preparatory period on an agricultural estate near Berlin in December 1935, he was accepted into the Youth Aliyah programme. In April 1936, he arrived at Kibbutz Kiryat Anavim near Jerusalem, where he lived until 1938. He kept in touch with his parents by letter. They were also able to flee to Palestine after the November pogroms.

The Youth Aliyah was founded in 1933 and goes back to the initiative of the resistance fighter and teacher Recha Freier. The aim of the organisation was to bring as many children and young people as possible from National Socialist Germany to Palestine and to involve them in building up the country. This project was based on a strictly religious world view, which was relaxed after the November pogroms due to the humanitarian emergency. From its official start in February 1934 until March 1939, the organisation was able to rescue around 12,000 young people to Palestine. There were also conditions attached to the aid: Parents could not accompany their children to Palestine and were obliged to pay part of the costs of their children’s departure, accommodation and education.

The young people were obliged to receive training in handicrafts, agriculture or horticulture as well as lessons in Palestinian geography and Hebrew. While still in Germany, the preparation of the young people for their later life in Palestine began in educational facilities. At the end of the preparation period, representatives of the Youth Aliyah determined the suitability of the young people. In Palestine, the young people were accommodated in children’s villages or kibbutzim (rural settlements), where they lived together in a large community, attended school or worked in agriculture or handicrafts during their training.

After the USA, Palestine (under the British Protectorate) was the most important host country for Jews from Europe. They were regarded there as citizens for the future construction of a Jewish state. The inclusion of the emigrants was difficult because of the great cultural differences and the fact that they could identify only to a small extent with the desired founding of a state. In addition, there were language barriers. Many immigrants were retrained in agricultural and craft fields, which meant a loss of status for some.

The country pursued a restrictive immigration policy that regulated immigration through quotas. Immigration permits were influenced by the profession, wealth and origin of the potential immigrant. But many also immigrated illegally to Palestine by sea on refugee ships.

"Asylum is only a marginal part of my life. I don't live to get it." The musician Bahila H. comes from Syria and now lives in Berlin. She is studying architecture at the Brandenburg Technical University Cottbus-Senftenberg, continues to make music and hopes for a life in Berlin away from traditions and the suppression of opinions.

Alaa M. and her husband came to Germany in 2015. They have built a new life in Berlin, their twins were born in exile. Alaa is a self-confident woman in Berlin who has to fight many prejudices. She does not accept that people judge her by her appearance.

“People often tell me that their relatives helped the Jews back then. Then I think ‘well, you don’t have to justify yourself to me.‘”

Germany – a new home for Jews?

In this interview, Alexandra Sadownik shares what home means to her and where she feels at home. She tells what she particularly likes about…

“Why do most Germans only know old stereotypes about other societies?

“Why do most Germans only know old stereotypes about other societies?“

The Syrian-Kurdish writer Widad Nabi has been living in Germany for 5 years. She does not see any distance between her and her German…

“My German failed because of the ‘integration dilemma’: I had a job, but was missing from the language course”

Please explain to me what integration is

“The unfortunate is that when I came here, Corona came and I didn’t have a lot of chances to be a normal Berliner.”

Nazeeha Saeed about settling in in Paris and Berlin

Nazeeha Saeed was harassed by state authorities because of her journalistic activities in Bahrain. In this interview excerpt she speaks about how she settled…

“Stop stirring up hatred against refugees!”

Your reservations do not help me

“For somebody without documents, the system is empty.”

An interview with refugee activist Bashir Zakaria on Berlin Oranienplatz conducted in 2013, in which he tells the story of his flight and arrival…

“A little bit of homesickness is haunting all my emigration poems.”

Mascha Kaléko on emigration and homesickness in spring

In an interview with Sender Freies Berlin on 1 June 1956, the poet Mascha Kaléko (1907-1975) looks back on her first years of emigration…