Internal Communication between the Vilnius Delegation of the American Jewish Joint Distribution Committee and the New York Headquarters. 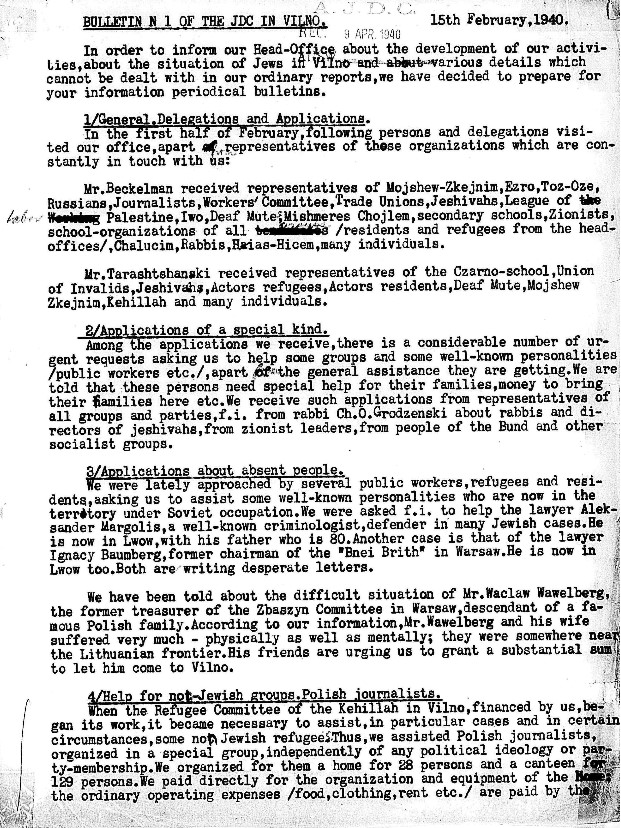 Bulletin N 1 of the JDC in Vilno.

In order to inform our Head-Office about the development of our activities, about the situation of jews in Vilno and about various details which cannot be dealt with in our ordinary reports, we have decided to prepare for your information periodical bulletins.

In the first half of February, following persons and delegations visited our office, apart from representatives of these organizations which are constantly in touch with us:

2/Applications of a special kind.

Among the applications we receive, there is a considerable number of urgent requests asking us to help some groups and some well-known personalities /public workers etc./, apart from the general assistance they are getting. We are told that these persons need special help for their families, money to bring their families here etc. We receive such applications from representatives of all groups and parties, f.i. from rabbi Ch. O. Grodzenski about rabbis and directors of jeshivas, from zionist leaders, from people of the Bund and other socialist groups.

We were lately approached by several public workers, refugees and residents, asking us to assist some well-known personalities who are now in the territory under Soviet occupation. We were asked f.i. to help the lawyer Aleksander Margolis, a well-known criminologist, defender in many Jewish cases. He is now in Lwow, with his fahter who is 80. Another case is that of the lawyer Ignacy Baumberg, former chairman of the “Bnei Brith” in Warsaw. He is now in Lwow too. Both are writing desperate letters.

We have been told about the difficult situation of Mr. Waclaw Wawelberg, the former treasurer of the Zbaszyn Committee in Warsaw, descendant of a famous Polish family. According to our information, Mr. Wawelberg and his wife suffered very much – physically as well as mentally; they were somewhhere near the Lithuanian frontier. His friends are urging us to grant a substantial sum to let him come to Vilno.

When the Refugee Committee of the Kehillah in Vilno, financed by us, began its work, it became necessary to assist, in particular cases and in certain circumstances, some non-Jewish refugees. Thus, we assisted Polish journalists, organized a special group, independently of any political ideology or party-membership. We organized for them a home for 28 persons and a canteen for 129 persons. We paid directly for the organization and equipment of the home: the ordinary operating expenses /food, clothing, rent etc./ are paid by the

Among the Christian refugees there were also Lithuanians, from localities now under foreign rule. The situation of these refugees was extremely difficult, especially in respect of accommodation, facilities. The home they are living in is very poorly equipped. The help they used to get from the so-called General Refugee Committee /for all Christian refugees/ was quite insufficient. The Jewish Refugee Committee gave them 50 blankets, 50 hay-mattresses and 100 sheets; this received great approval from the authorities.

Among the impoverished Polish population, there was also Mr. Niesluchowski, an aged man, a lawyer, former counsel of the State Forests Office in Vilno, father-in-law of Mr. Raczkiewicz, the present President of the Polish republic. Mr. Niesluchowski approached us with a written application to lend him a sum of 300 Lits, until he would be able to get in touch with his son-in-low, Mr. Raczkiewicz, and receive some money from him. We granted his request and […] him 300 Lits.

7/The problem of dislocation.

After the police-registration of refugees ordered by the authorities was over, the refugees and the refugee-relief organizations were under the menace of the so-called dislocation of refugees. There was the possibility that all refugees would be evacuated without any plan into small localities, where the conditions were not adapted to receive a large number of refugees and where it would be impossible to organize an efficient relief-activity. Because of the efforts of local leaders, the dislocation was not carried into practice as a system but sending of some people into provincial towns is still going on. It was decided that organized groups have to be evacuated from Vilno, but systematically, with the collaboration of the Refugee Committee.

Up to the present, ab. 3000 persons have been evacuated from Vilno and spread over more than 50 localities.

The organized groups are sent to provincial localities according to a plan. Up to the present day following groups were evacuated or are still proceeding with their evacuation:

The Refugee Committee organized, together with the “Toz,” a collection of clothes, linen etc. for refugees. Several hundred persons are visiting Jewish houses in Vilno and collecting what they can get.

10/A conflict inside the Refugee Committee

Because of certain discords and machinations in the Kehillah, there

happened an incident in the Refugee Committee: the chairman of the Committee suspended two members of the Committee who took part in a political action against the Kehillah. This provoked a great discontent and anger among the yeshivahs and the orthodox people, as one of the suspended members was their leader. We are in possession of a number of protests and petitions demanding the re-establishment of the two persons in their member-rights. The problem was of such a serious nature that we could not take the purely formal standpoint of not interfering with inner affairs of the Committee. On the contrary: we were obliged to show interest for this matter, to take part in meetings of the Committee, to talk to representatives of the Kehillah and of the interested groups. We had to point out that the work for the refugees must be free of all political considerations and that all groups should co-operate in the Committee, with the common task of assisting the refugees.

According to the reports of “Toz”, 5541 refugees were assisted in January in dispensaries, consulting-rooms etc. of this association. The number of infectious diseases was a small one; on the other hand, there were many cases of frost-bites among the arriving refugees. In several cases limgs had to be amputated. Because of the great number of sick people, the hospitals were overcrowded. In January, there were 257 ill refugees in hospitals, with 3155 hospital days.

Relief Committee in London. A sum of 100000 Lits, to be used for various purposes, has been received from London. The sum has been spent as follows:

In order to update the New York headquarters of the Jewish aid organization American Jewish Joint Distribution Committee about the situation of Jewish refugees and the aid operations operated by the Joint in Vilnius, the delegates on-site, Moses Beckelmann and Yitskhok Giterman, wrote bulletins. On 15 February 1940, the first among them was written and archived on 9 April 1940 in New York.

It is a description of the challenges that the Joint had to face in terms of refugee aid in Vilnius and how they met these challenges. The list contains services for Jewish (and non-Jewish) refugees, relocations of refugees to the countryside ordered by the Lithuanian authorities, conflicts between the different Jewish aid organizations as well as budgetary matters.

“Furthermore, where should I go now? To America?”

Mendel Balberyszski on the difficult decision to keep fleeing

“As there are now in Vilno refugees from all Jewish centres in Poland… .”

In November 1939, a group of Polish-Jewish refugee writers and journalists formed the “Committee to Collect Material about the Destruction of Polish Jewry 1939”…

On November 16, 1939, Owsiej Bułkin was the seventh refugee stranded in Vilnius who gave a report to the Komitet tsu zamlen materialn vegn…

“Sugihara apparently knew the fate that threatened Jews in Poland and everywhere in Europe.”

The Polish Jewish family Weyland from Łódź survived the Holocaust thanks in part to Sugihara Chiune (1900–1986), the Japanese consul in Kaunas just before…